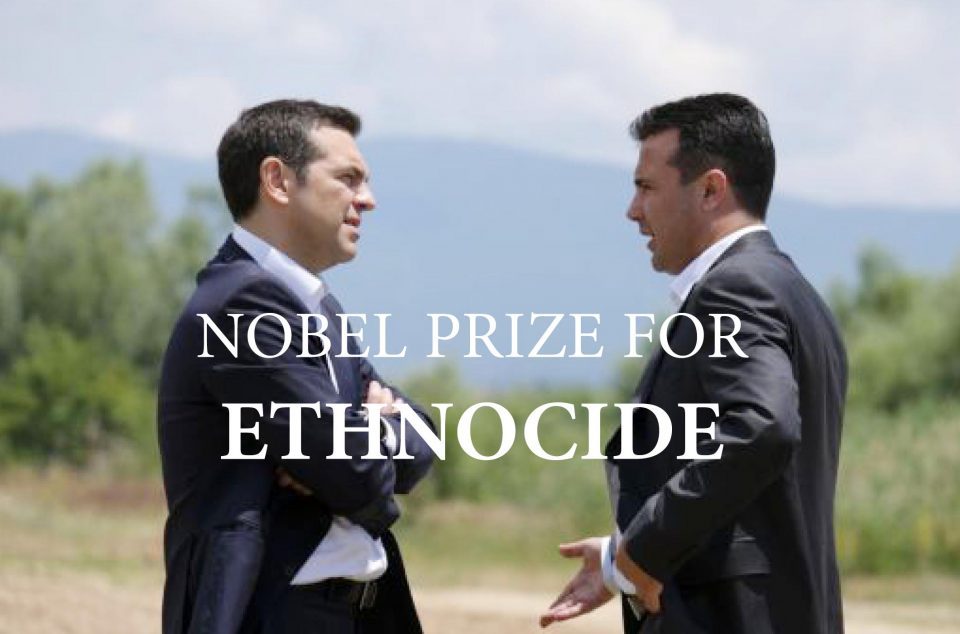 The gangsters are not ashamed of anything, and the air and the paper endure everything. Thus, this stupid ultra-propaganda walk from Skopje to Athens to the dark team for the “glorious”, “Nobel” “successful” completion of the black ethnocide against the Macedonian people is trying, with the idiotic nomination of Zaev and Tsipras for the Nobel Peace Prize, before of the Macedonian and the international public to make and serve a pie out of shit.

But the one thing that is certain, shown and proven, is that all those who were and are still deeply involved in this two-decade, terrible, criminal, anti-civilization spat over Macedonia, from the international stinking vermins, to the domestic spy scums, paid by the CIA to work against its people, from the ministerial position in the government, from the core of national statehood, to the world’s most pathological traitor, the quisling Prime Minister Zoran Zaev – is that they succeeded to turn a beautiful home pie into a black international shit.

Well, for that, you monkeys, no Nobel Prize is awarded. For that people go to prison. The higher you climb, the harder you fall! And so it will be with the “Nobel Prize” nominee, taken out of a Murtino field, Zaev, and with all his gangster and treacherous squad, although now it seems impossible.

The ethnocide of the Macedonian people and the destruction of the Republic of Macedonia, however, is not the fall of the Berlin Wall, or the abolition of apartheid in South Africa. These two petty Balkan super-politicians, Zaev and Tsipras, whom now you see, and tomorrow, after the elections, will simply vanish, are merely tragicomic criminal clowns in the global circus, which, unfortunately, still has a loyal audience on the hilly Balkans.

In truth, it would be much easier to the US, the EU, NATO, the CIA, Greece, Bulgaria and Albania if they all together, synchronized, physically, militarily attacked Macedonia with all available resources and assets and wipe it out in a second. But the moral scums always wants to turn out very nice, gentlemen, democratic, respecters of the rule of law and international law, so they decided to try their most sophisticated and invading unmanned invention – administrative suicide and parliamentary self-destruction of the nation and the state.

But their twisting and pretending that they are superdemocrats and super civilian humanists and legalists did not help them at all, and they have not endured any official protocol of enacting important laws for the country, or signing important international agreements, to be carried out according to the constitutional and legal provisions, so they loosened their collars and started to do it in their way, a verified gangster, violent, unlawful way:

first they carried out a coup in the Parliament, signed a mortally harmful agreement with Bulgaria, illegally and forcefully adopted the “Law on Albanian Language “, signed the capitulation agreement with Greece, repudiated the referendum decision of the majority of the Macedonian population to reject the agreement, ruthlessly blackmailed and costly bribed eight lawmakers to open the procedure for amending the Constitution and completely redefining the state, ignored the legal obligations the most important documents for the state to be signed by the President of the Republic, they got lost in the tender criminal, in the hysterical complete partisation of the state, in the introduction and strengthening of the police state and the introduction of deep fear among the citizens. In a word, they became official state robbers! And as such, the ruthless international neo-colonialist scums, who have not ceased to invent different kinds of shiny (yet clearly transparent) cellophane in which all that moral Zaev’s waste will be wrapped up to resemble a democracy and a major civilization achievement.

And here, they went for the Nobel Prize for ETHNOCIDE on the Macedonian people and for the destruction of the Republic of Macedonia.

Oh, what unprecedented scums and jerks are those who have thought it out and shamelessly devalue the meaning and reputation of the Nobel Prize, as well as those two poor “Nobel nominees” who accept the nomination so idiotically. One should really have no brain or moral to think and believe that for this surreal criminal-political-military swindle, for this most sophisticated ETHNOCIDE on the Macedonian people, never done or known before in such a form since the dawn of human civilization, to deserve to be ranked among the greatest humanists in the world. Idiots!

Of course, it will not happen! It’s just one of those moronic, inflated, lubricated, colorful, preservatives of Zaev, which should loudly and “vividly” explode over Macedonia and the whole Balkans!

But when this “Nobel” storm in a glass of water calms down, Zoran Zaev will forever remain a poor, immoral traitor and criminal who, by violence, fraud and heavily paid and bribed “revolution” supported by the Greater Albanian scoundrels and terrorists installed his Black Junta, and the fascist Denyen Tsipras will return to his agonistic Greek socio-political and miserable economic reality until the next elections, after which he can explain to his fellow party members what happened, and nothing more than that.

It remains only that, unsatisfied with this, completely unsuccessful, lubricated preservative outcome of the “Nobel Prize” nomination for ETHNOCIDE, the international jokers with the innocent Macedonian people, to propose NASA to name two newly discovered stars after Zaev and Tsipras in the endless moral civilization vacuum and the vast and endless universe of the immense globalist madness.

My dear Macedonian people, I know that now it sounds shocking and frightening and this latest cheap and stupid international propaganda charade with the “nomination”, because it is meant to intimidate and negatively impress, and you are not lying yourself  in your deepest feelings and beliefs, you are completely right when you whisper in yourself, because in Macedonia you do not dare to utter it out loudly, that the stupid king Trajan Zaev has big donkey ears and that he is just a scoundrel and not even a hundred Nobel prizes would help him to redeem himself for his unprecedented and irreversible treacherous Evil that he inflicted on the Macedonian people and the Republic of Macedonia.