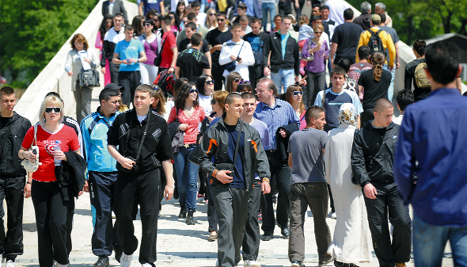 The title of this column would be great for a subtitle contained in the last chapter of a history book that would be written in 2048. I want to believe that it would be the last chapter because of historical distance and not because of the uncertainty of the further survival of those who will be mentioned in the book. I am a person who believes that things are not unchangeable, only desire and faith is needed, so this should be counted as a defeat but not as a long-lasting and final loss.

Great statesmen, both in the past and today, give serious attention to what will be the title of the part of the history book concerning the period in which they acted. This is the case with the great statesmen of the powerful countries that look to the future. Unfortunately, the self-declared progressive characters would not recognize visionary thinking, rejecting it as a retrograde, not understanding that it is about the future, not history. It is for this reason that we do not belong to in the rank of countries whose histories are filled with great statesmen. Do not pretend that we cannot look for our Bismarck, De Gaulle, Churchill, Wilson, Roosevelt, Reagan, etc. because our neighboring countries have great names too, at least for their countries and nations.

I do not know if our Prime Minister and our Foreign Minister know how the Macedonian question was opened, from which crisis it came out and which Congress had formalized it as an open issue. They have counselors so let them tell us, it is sufficient to note that the issue was opened after a crisis that took thousands of lives. After all, such questions are opened and closed after major tremors followed by major clashes and wars that take thousands of human lives. I hope that at least they know this, it’s basic. In our country, the public is not aware of the extent of the visionary thinking of the characters in our history who, during their time, took on the leadership role, whether in an organization, movement, or the like. Exactly for 140 years in the actions of the Macedonians, there were two main intentions, the first was to create an independent Macedonian state, the second was to avoid closing the Macedonian issue at all costs until the moment when the Macedonian people obtain all of their rights entitled to them as basic human rights. Our public is not aware of what pragmatic figures we have in our history who were willing to do everything to achieve what our people fought for. Why is it important to keep the issue open until it is closed to in favor of the Macedonians, in particular, until they get their basic rights? This is essential. If the issue was closed without any rights, at the same moment the assimilation of the Macedonians would have begun, which would have resulted in success because without the issue Macedonians would know nothing more than what would be served to them.

If the question had to be kept open at all costs until the moment of acquiring basic human rights, the logical question is, do we now enjoy these rights as a people at this moment? Do we have the right to self-determination? The answer to these questions will lead you to the conclusion of the question – are Prime Minister Zaev and his entire government closing the issue after we have gained the basic rights. If your view is that we do not have the right to self-determination then closing the issue in such a situation leads to what it would have led in the past if the then leaders allowed the issue to be closed.

For all this to be only a defeat and not a long-lasting loss, it takes a lot of work, work and only work, only with a lot of work we will make Macedonia a modern state that will communicate with the world. To get out of this misery which our country is in and to step into the 21st century it is necessary to change the political thought, the mindset and the people in politics, the name change does not bring you into the 21st century. I hope this change will begin in 2019.

We are talking about the future not about history.

Srbov: It is necessary to have parliamentary elections and a new government that will address the economic and energy crisis

Why did Macron refuse to meet the “toxic” Zaev?