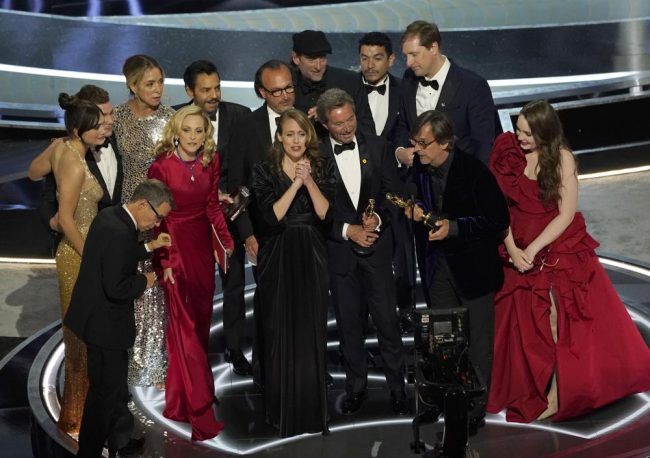 Oscars night Sunday had a double feature of history-making honors for actors Ariana DeBose and Troy Kotsur, while the heartfelt film “CODA” overpowered “The Power of the Dog” for a groundbreaking best picture win.

And in one of the wildest moments in Academy Awards history, a dust-up on stage saw Will Smith slug comedian Chris Rock over a joke about the actor’s wife, Jada Pinkett Smith.

“CODA,” a coming-of-age drama about a child of deaf adults, became the first film featuring a predominantly deaf cast to win an Oscar.

DeBose, who portrayed the spirited Anita in the movie musical “West Side Story,” was named best supporting actress during the ceremony at Dolby Theatre in Hollywood, California, making her the first openly queer woman of color and the first Afro-Latina to win an Academy Award.

Kotsur, who played the family patriarch in “CODA,” became the first deaf male performer to receive an Oscar with his win for best supporting actor.

“Imagine this little girl in the backseat of a white Ford Focus. Look into her eyes,” DeBose said during her acceptance speech. “You see [an] openly queer woman of color, an Afro-Latina who found her strength in life through art.

“That’s what I believe we are here to celebrate. So to anybody who’s ever questioned your identity ever, ever, ever, or find yourself living in the grey spaces, I promise you this: There is indeed a place for us.”

Her win came 60 years after Rita Moreno won best supporting actress for her portrayal of Anita in the original film adaptation of “West Side Story.” DeBose referred to Moreno, who was in the audience, as a “divine inspiration.”

Kotsur is the second deaf person to win an Oscar, following his “CODA” co-star Marlee Matlin, who was best supporting actress in 1987 for the drama “Children of a Lesser God.”

The 53-year-old Kotsur called his dad his “hero” as he accepted his award.

“He was in a car accident and he became paralyzed from the neck down, and he no longer was able to sign. Dad, I learned so much from you. I’ll always love you,” Kotsur signed.

“This is dedicated to the deaf community, the CODA community, and the disabled community. This is our moment. To my mom, my dad and my brother, Mark; they’re not here today, but look at me now. I did it.”

Later in the ceremony, Rock joked to Pinkett Smith, who has a shaved head, that he was looking forward to seeing her in “G.I. Jane 2.”

Will Smith then walked onstage and slapped a stunned Rock in the face, before yelling to him, “Keep my wife’s name out your f—ing mouth.” Producers cut the audio of the startling exchange.

Smith later won best actor for his portrayal of the eccentric father of tennis greats Venus and Serena Williams in “King Richard,” saying in his acceptance speech, “Love will make you do crazy things.”

Jessica Chastain won best actress for her performance of the titular televangelist in “The Eyes of Tammy Faye.” And Jane Campion became the third female filmmaker to win best director for her work on “The Power of the Dog,” a dark Western drama about a domineering cattle rancher.

“The Power of the Dog” led all films with 12 nominations Sunday, including for best picture.

“This year, the Academy hired three women to host because it’s cheaper than hiring one man,” Schumer deadpanned.

Sykes, meanwhile, referred to the Oscars as a place “where movie lovers unite and watch TV,” and said of the brooding “Power of the Dog” that she “watched that movie three times, and I’m halfway through it.”

Other nominees for best picture Sunday included “King Richard,” “West Side Story” and “Belfast,” a semi-autobiographical drama by Kenneth Branagh set amid the social unrest of Northern Ireland in the late 1960s.

Sunday’s Oscars returned to the show’s longtime home at Dolby Theatre after last year’s Academy Awards transitioned to the more low-key Union Station in Los Angeles due to the COVID-19 pandemic.

Stars including DeBose, Matlin, Chastain and Andrew Garfield wore different shades of red on the Oscars’ first full-fledged red carpet in two years, where many dressed in bold gowns and glittery outfits.

The Oscars generated controversy after organizers said the ceremony wouldn’t announce the winners of eight craft categories during the live broadcast. Those awards were instead unveiled online before the show, with prerecorded segments airing during the telecast.