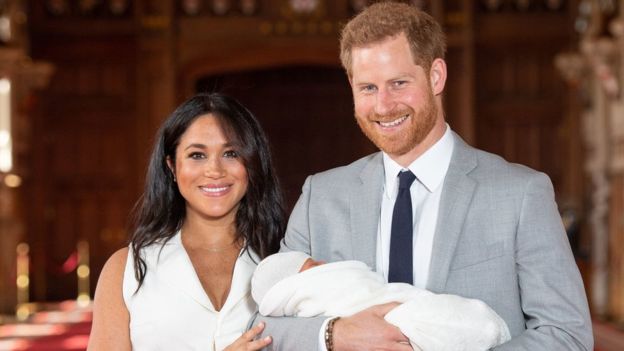 Harry and Meghan, the Duke and Duchess of Sussex, gave the world a first look Wednesday at their son, who appeared quite comfortable in his new role as royal baby, Washington Post reported.

The two-day-old attended his first photocall inside St. George’s Chapel at Windsor Castle, cradled in his father’s arms. Truth be told, he looked . . . sleepy — and, swaddled in a baby beanie and blanket, nice and toasty.

Harry said the couple was “so thrilled to have our own little bundle of joy.”

Meghan said she’s got “the two best guys in the world.”

The still unnamed Baby Sussex, who is seventh in line to the British throne, was born under a partial veil of secrecy Monday at dawn, weighing 7 pounds, 3 ounces.

The couple did not (yet) reveal a name — but said he would meet the monarch later in the day.

Speaking to a pool reporter at Windsor, Meghan said, “It’s magic, it’s pretty amazing. I have the two best guys in the world so I’m really happy.”

She said that her baby “has the sweetest temperament, he’s really calm.”

Laughing, Harry said, “I don’t know who he gets that from.”

When asked whom he takes after, Meghan said: “We’re still trying to figure that out.”

Meghan was wearing heels and a cream-colored dress. The couple gave a very short interview, and then said they were off to introduce their son to the queen and her husband, the Duke of Edinburgh.

Reflecting the international interest in the baby, the U.S. broadcaster CBSwas said to have had a cameraperson present, prompting some tut-tutting in British circles. Usually, only a small number of British outlets are permitted at such events.

Royals tend to pick traditional names for their offspring. And so it was no surprise that before the announcement, bookies said that the favorite names for Baby Sussex were Spencer, Alexander, James, Philip, Arthur and Albert.

Prince Harry and Meghan have shared the first glimpse of their newborn son.#RoyalBaby
👉 https://t.co/b1GH6B5HYq pic.twitter.com/Eg5Xnsrz2v