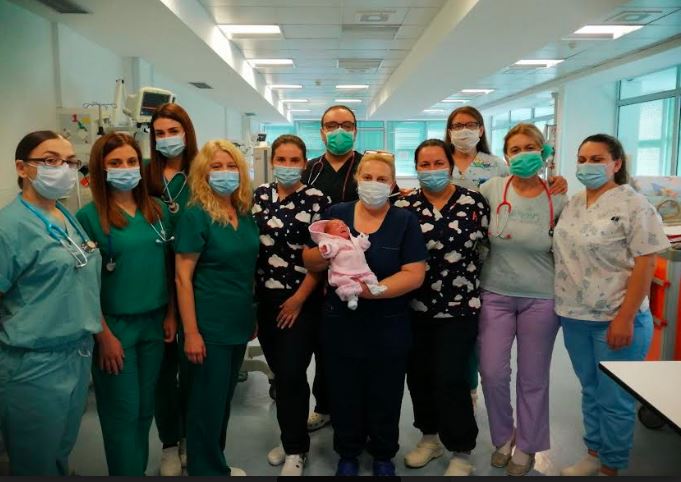 Baby Inara was born on 27 April at 28 weeks of gestation at the University Clinic for Gynecology and Obstetrics in Skopje.

She was discharged medically fit from the hospital on Friday, having attained a weight of 2120 g.

“Three-month-old Inara will go home for the first time today,” the hospital said. “She is our youngest heroine in 2020.”

NICU head Renata Dimitrioska pointed out that during the three months at the hospital, the premature baby was monitored with close attention at all times and regular checks were made on the vital organs, which demonstrated functional maturation at discharge from hospital.

The baby had serious breathing problems that come with the immaturity and low birth weight, which is why she was put on a respirator for 40 days and then extended with non-invasive ventilation for another 15 days, which means her respiratory function was supported for almost two months, Dimitrioska said.

She noted that premature babies with extremely low birth weight are at a high risk for complications and more susceptible to infections.

With baby Inara too, we were fighting a more severe infection which was fortunately cured, Dimitrioska added. “We’re discharging the newborn in a stable condition.”