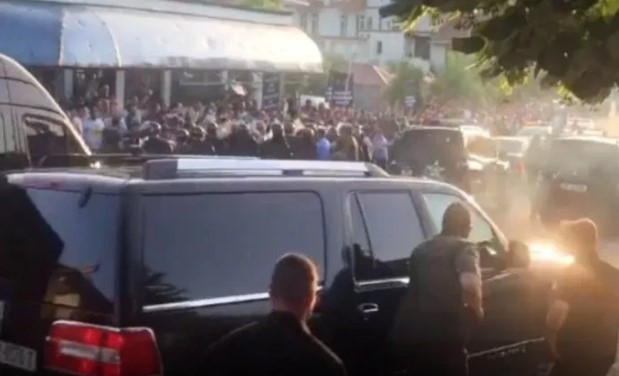 Protesters pelted the convoy carrying Albanian Prime Minister Edi Rama with rocks in the city of Librazhd. Police had difficulty containing the crowd from stopping Rama’s convoy.
Rama managed to avoid the bulk of the crowd by using side roads. Several protesters were injured after being hit by vehicles from Rama’s convoy.

The incident happened as the Albanian Parliament voted to denounce President Ilir Meta for his move to cancel the municipal elections, which were expected to take place on June 30th. This exacerbated the political crisis in the country, where the conservative opposition holds regular mass protests against the Socialist Government.

Rama threatened to remove Meta from office, but it is unclear if he can do so since the move needs to go through the Supreme Court, which is not operational at the moment as a result of a purge of judges.

The Prime Minister is accused of corruption and ties with drug smugglers as recently published wiretaps reveal that his party was using drug money to buy votes. The political crisis has affected Albania’s chances of opening EU accession talks, which also damages Macedonia’s prospects of doing the same.

The Group of States Against Corruption of the Council of Europe (GRECO) published the second report on the evaluations of the measures taken by the Macedonian authorities in English, in French and in MK with an asterisk. In the explanation of the star, it is written that it is an unofficial translation,...
Macedonia 05.07.22 | 15:24