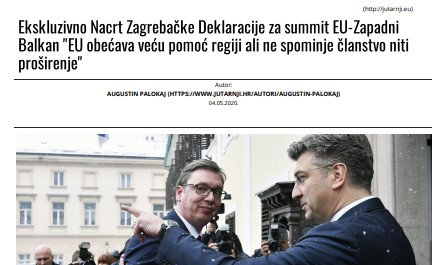 The summit in Zagreb, which was supposed to take place this week due to the coronavirus situation will be held alternatively on May 6 via a video conference, Euractiv. Jutarnji.Hr writes.

Although the Croatian presidency’s ambition was for this summit to be a turning point in the EU enlargement process and the prospects for membership of the countries in the region, the outcome will be below these expectations.

Zagreb had hoped for a strong political message that would mark 20 years since the EU’s first summit in the Croatian capital, but it seems nothing will happen. This is evident from the draft of the “Zagreb” Declaration” which will be adopted and into whose content Jutarnji had insight.

The text does not mention enlargement, membership or EU integration. there is only an indefinite sentence for a “European perspective” and a strong connection. At the same time, it can be said that this Declaration offers much less in its content than the one 20 years ago. The reason for this, as Jutarnji learns from diplomatic sources, is the insistence of some countries, such as France and the Netherlands, but to some extent also Germany, that this should not be an enlargement summit.

The text does not mention the biggest success in that process during the Croatian presidency – the decision on accession negotiations with Albania and Macedonia. But diplomats say it is good that all of this, regardless of the circumstances, will be held at this summit and that the support for the region’s “European perspective” will be repeated, so that it is not forgotten.

From the text of the draft declaration, it is clear that the Covid-19 crisis had an impact on both current and future relations with the region. At the same time, it can serve to strengthen the cooperation that the EU is constantly looking for (the famous project “mini Schengen” developed by Albania, Serbia and Macedonia), but also to strengthen relations with the EU.