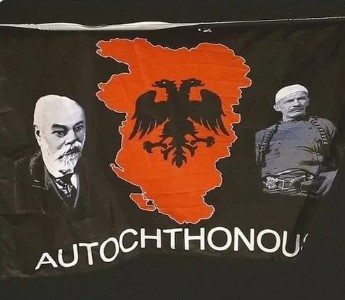 Kosovo born star Dua Lipa continues to rile the internet a day after her message that showed the map of Greater Albania, incorporating parts of Macedonia, Greece, Serbia and Montenegro. The map, widely used by Albanian nationalists, was accompanied by the word Autochtonous, meant to declare that the Albanians are native to the Balkans, while others, as Lipa implied, are “descended from migrants or colonists”.

The flag, which also includes the images of Albanian national heroes Isa Boletini and Ismail Qemali, first became famous in 2014 when an Albanian flew a drone carrying a large depiction of the flag during the already tense football match between Albania and Serbia in Belgrade. The players fought over the flag, and the game was interrupted.

The borders were first put forward by the League of Prizren in 1878, as the “natural borders of Albania”. It includes almost half of Macedonia, the whole of Kosovo, a large share of Greek Epirus and Corfu, and smaller slivers of land from Serbia and Montenegro as well as the majority Muslim province of Sandzak in Serbia. 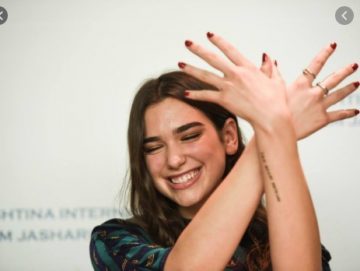 Academics and journalists from the region are fighting over the obvious provocation, coming from a very popular source. Each nation in the region has its similar maps, and they have frequently led to tensions and wars. Some are whitewashing Dua Lipa’s move by saying she was just pointing to the fact that Albanians live in these lands and have the right to self-determination. Her focus on the native origin of the Albanian, whose nation founding myth has them as descendents of the Illyrians, is frequently used against the neighboring Slavic speaking nations, who are declared as more recent settlers in the Balkans. Albanian nationalists focus on this theory as a way to present their neighbors as impostors on Albanian lands.

With just three weeks to go before the school year starts, the Education and Healthcare ministries still haven’t come up with a plan how they expect children to go back to schools. Public education has been put on hold since March, with the outbreak of the coronavirus, and except for an improvised...
Macedonia 11.08.20 | 11:15