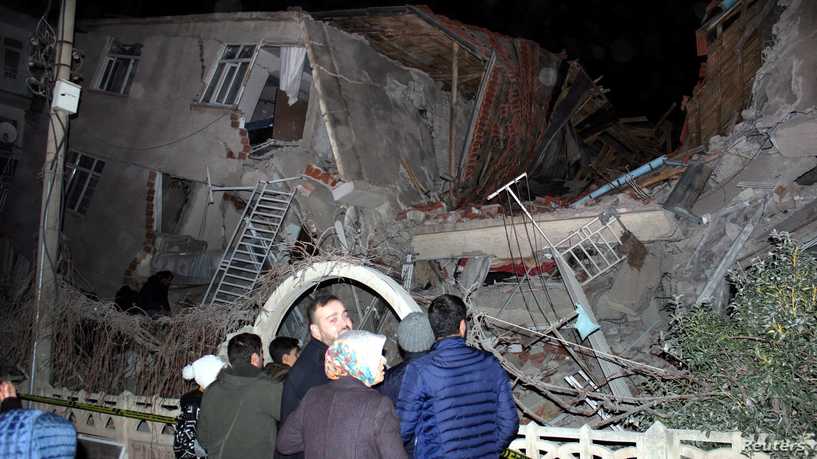 People stand outside a collapsed building after an earthquake in Elazig, Turkey, January 24, 2020. Ihlas News Agency (IHA) via REUTERS ATTENTION EDITORS - THIS PICTURE WAS PROVIDED BY A THIRD PARTY. NO RESALES. NO ARCHIVE. TURKEY OUT. NO COMMERCIAL OR EDITORIAL SALES IN TURKEY.

A magnitude-6.8 earthquake in eastern Turkey has killed at least 21 people and injured 1,030, according to the national disaster agency AFAD.

At least 17 people were killed in the city of Elazig and four in neighbouring Malatya, AFAD said.

State broadcaster TRT showed dramatic footage of dozens of rescue teams working in silence on top of a multi-storey building that had collapsed.

The broadcast showed one elderly woman being rescued as onlookers watched in shock. “My daughter is there too,” she said, pointing to the collapsed building. She was immediately taken away by ambulance.

Rescue teams called out into the rubble in the hopes of finding survivors.

TRT said a six-months pregnant woman, identified as Pinar Disli, was among those rescued on Saturday morning.

As many as 13 people are still under the rubble of another multi-storey building that collapsed in central Elazig, CNN Turk reported.

“I have my friends under there. We are waiting,” one man told the broadcaster, as rescue teams worked with excavators and sniffer dogs to reach lower storeys of the building.

Rescue teams are using sensors to listen in to the rubble and have located a mother and a child trapped in the second storey, a rescue member said.

The epicentre of the quake was located in the Sivrice district of Elazig. The quake was felt in several surrounding cities and in Syria’s north, Turkish state news agency Anadolu reported.

AFAD and the Turkish Red Crescent have sent rescue teams and aid, including food and blankets, to quake-hit areas, and Turkey‘s Defence Ministry said it had dispatched planes to deliver aid and assess the damage together with drones.

The army has sent soldiers to the affected region while AFAD teams have started distributing tents to residents in rural Elazig, CNN Turk reported.

AFAD put the local temperature at minus 8 degrees Celcius. Many locals took to social media to offer help and shelter.

Turkey is particularly prone to earthquakes. One of the deadliest was a 7.6-magnitude that struck in 1999. At that time, the epicentre was in Golcuk to the south-east of Istanbul.

It killed more than 17,000 people in the wider region.