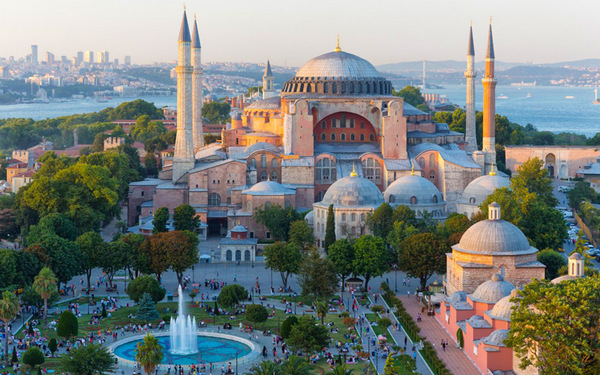 Erdogan shared the decree on Twitter on Friday with the caption “congratulations” just over an hour after Turkey’s top administrative court overturned a 1934 decree that made the Hagia Sophia a museum and symbol of secularism.

It was not immediately clear when the 6th-century compound would be open to Muslim worshippers.

The court said the Hagia Sophia is the property of a foundation established by the Ottoman Sultan Mehmed II, who in 1453 captured Istanbul, then known as Constantinople, and turned the already 900-year-old Byzantine church into a mosque.

The compound was registered as a mosque at the time and this cannot be changed, the court said, according to the Anadolu news agency, which used the nationalist moniker “Symbol of the Conquest” to refer to the Hagia Sophia.

It is “legally impossible” that the Hagia Sophia be “used for other purposes than a mosque, as described in the articles of [Mehmed II’s] foundation,” the court said, according to the report.

The court was reviewing a 2016 petition by a little-known association which argued the Hagia Sophia was the property of Sultan Mehmed II.

It had also argued a signature by Mustafa Kemal Ataturk, the founder of the modern secular Turkish republic, on the 1934 cabinet decision was forged and thus invalid.

“The Council of State has corrected a wrong decision made 86 years ago,” the petitioning association’s lawyer Selami Karaman told dpa by phone.

Karaman said the court decision has to be implemented within 30 days, adding that Friday’s decision will mean that the Hagia Sophia’s “status as a mosque is automatically reinstated.”

“Congratulations on this to Turkey and the entire Muslim world,” he added.

The verdict comes as a result of long-standing calls by Turkish Islamic hard-liners to turn the 6th-century UNESCO heritage site back into a mosque.

The United States, Russia and Greece, along with UNESCO, expressed concern ahead of the ruling.

Erdogan promoted the plan for the mosque conversion to rally his religious voter base ahead of last year’s local elections.

Ahead of the decision on Friday, police barricaded the area around the Hagia Sophia.

Last year in February, hundreds of Islamic hardliners gathered and prayed in front of the compound, calling for its reopening as a mosque and chanting religious slogans.

A cultural landmark for both Christians and Muslims, the Hagia Sophia is one of Turkey’s most popular tourist destinations. It attracted 3.7 million visitors in 2019, according to Istanbul governor’s office.

The mosque conversion “will disappoint millions of Christians around the world,” Istanbul-based Patriarch Bartholomew I, the spiritual leader of the Orthodox Christian Church, said in a statement earlier this month.

Karaman said the Hagia Sophia may not be able to be opened for Muslim worship immediately due to logistical issues including covering Christian symbols prohibited in mosques.

Pro-government media recently suggested stretching a curtain over the symbols, among them a well-known mosaic face of an angel uncovered in 2009.

A small group of people, holding Turkish flags and chanting “God is Great,” gathered nearby the compound to celebrate the ruling.

“Thank God, the chains on the Hagia Sophia have been broken after 86 years,” one of the visitors at the site, Ayse Alkan, told dpa, adding that she hopes to be able to pray inside the compound soon.