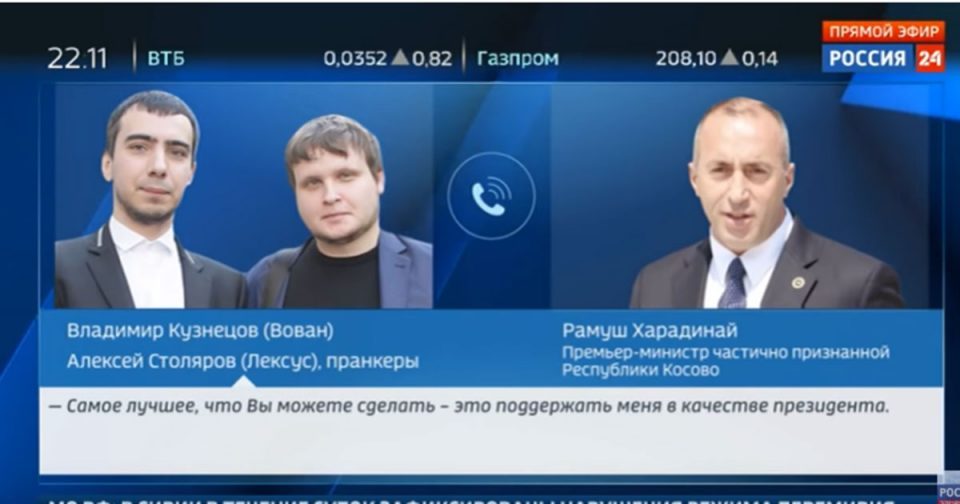 Russian Television Russia 24 published today pieces of a conversation between Kosovo Prime Minister, Ramush Haradinaj and Russian comedians Vladimir Kuznetsov (Vovan) and Alexei Stolyarov (Lexus). The recording shows how Haradinaj fell for a prank by this comedy duo back in April, when one of them introduced himself as the Ukrainian President Petro Poroshenko. Fake Poroshenko persuaded Haradinaj to give him support in the upcoming elections on his Twitter account. In addition to Poroshenko, Haradinaj gave his support to the fictitious „future prime minister“ Vovan Lexus – which is actually only a combination of the names of the two comedians, kossev.info reported.

„I wish the Ukrainian people free and democratic elections. To my friend Petro Poroshenko and his future Prime Minister Vovan Lexusov (I) wish all the best and victory to lead Ukraine towards Euro Atlantic integration. Kosovo and Ukraine stand together as peoples of freedom and prosperity,“ Haradinaj tweeted at the end of April this year following a conversation with the fake Poroshenko, who promised he would recognize the independence of Kosovo – if he won the presidential election again- and asked for Haradinaj’s support. This tweet, however, was soon deleted by the Kosovo prime minister.

„I hope that everything will be alright up there and I wish you a happy Easter. It is very important for the country, I will pray for you at all levels of the elections,“ Haradinaj said during the telephone conversation.

„Yes, I think I will recognize Kosovo as an independent state after my victory,“ the fake president of Ukraine replied.

„It would be a great step, the right step. Thank you very much. Is there anything I can do for your victory in the elections until Easter?“ Haradinaj asked.

„The best you can do for me is to support me as the president,“ fake Poroshenko replied.

Haradinaj then offered to publish a photo with the Poroshenko on his Twitter account and to write that he is praying for the Ukrainian people and the victory of President Poroshenko. At “Poroshenko’s” suggestion, the Kosovo Prime Minister agreed to send him the exact text he was supposed to publish on Twitter.

„I will read you the text that you can alter. That is the same text shared by the leaders of other countries, and you can share it too…“ the fake Poroshenko told Haradinaj after which the Kosovo prime minister posted the controversial tweet.

„The Kosovo Prime Minister, Ramush Haradinaj, wished luck to Poroshenko and his future prime minister, Vovan Lexus in the Ukrainian elections last night,“ Vladimir Kuznetsov tweeted after Haradinaj fell for the prank by the Russian comedians.