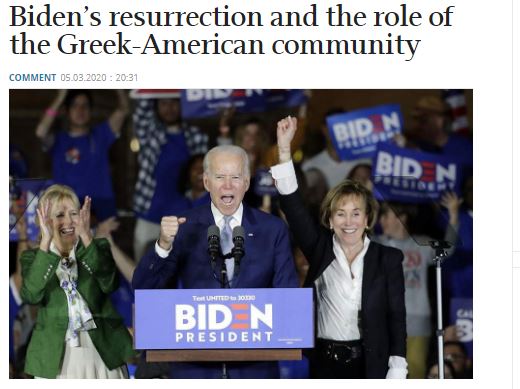 Greek daily Kathimerini called on Greek Americans to support Joe Biden in the 2020 presidential race. The paper welcomes the rise of the ageing Democratic candidate in the primaries against Socialist Bernie Sanders, and sees him as a more trustworthy ally on “Greek issues” than Donald Trump, who famously sided with Turkish President Erdogan on a number of issues.

Going beyond the internal issues facing the Democrats, the revival of Biden’s candidacy is important for Greece and Cyprus. Biden is one of the few prominent American politicians who has dealt with Greek issues, both in the Senate for 36 years and as vice-president for eight. The communication channels with the Greek-American community are important and can prove effective. In this decisive phase, where everything still hangs in the balance and each candidate counts on his friends and supporters – for funding and votes – it is time for the Greek diaspora to mobilize and to ensure that Biden’s candidacy does well. Hellenism, both Greek and Cypriot, has every reason to want Biden to succeed, the paper declares in an editorial written by Tom Ellis.

President Trump did not directly confront Greece on any serious issue, but sided with Erdogan when the Turkish President began a push against the Syrian Kurdish forces on the border between the two countries. This prompted the resignation of his Defense Secretary James Mattis. More recently, the US and the UK seem to be aligning with Turkey in its defense of the Idlib region in Syria against the Syrian Government backed by Russia and Iran. This is unnerving Greece, which is facing a new migrant flood on its own border with Turkey. Kathimerini writes that Biden will side with Greece more closely than with Turkey, insisting that “he will be able to see the difference – and act accordingly- between America’s sincere democratic partners and allies and authoritarian leaders with whom he may have to cooperate, but will certainly not treat them with awe or as close personal friends”.

After Bucha, Biden accuses Putin of being a war criminal

Biden: US will defend every inch of NATO territory