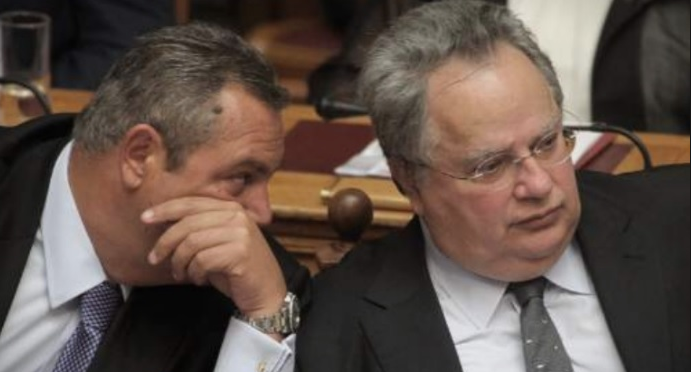 Former Greek foreign minister Nikos Kotzias has lodged a suit with the Supreme Court prosecutor against former defense minister Panos Kammenos for slander, threats and the spreading of fake news, it emerged on Monday, Kathimerini reported.

Specifically the suit takes action against Kammenos for verbal abuse, slander, issuing threats and collaboration to disseminate fake news against politicians or the government.

Kotzias linked the action to previous suits and did not rule out seeking financial damages from his former cabinet colleague.

“I believe that there is a need for the courts to protect me,” Kotzias said, accusing Kammenos of “a careful plan to target me from the summer of 2018.”

He claimed that this alleged plan would make Kammenos responsible for any harm that may come to him or any member of his family.

Kotzias added that the way he was allegedly targeted by Kammenos suggested that “there could be something more behind this unexplained rage.”

In the suit submitted to the Supreme Court by his lawyers, Kotzias makes specific allegations of threats and pressures he says he was subjected to in connection to the Prespes name deal.

He also refers to alleged slander against him by Kammenos over the latter’s reference to 50 million euros in funding the government he claims Kotzias secured for the government from the US-Hungarian financier Geoge Soros as well as to the alleged mismanagement of secret state funds.

Kotzias said he considered Kammenos responsible for hundreds of threatening letters, telephone messages and emails he said he received as well one letter containing bullets, blood and earth “in which my family was to be buried,” he said.

For his part, Kammenos responded defiantly to the accusation on Monday, saying that he is ready to submit all his evidence to the judiciary, “which [Kotzias] fears so much.”

Kotzias: The government is undermining the Prespa Agreement

Kotzias: Plaque on Alexander’s monument saying he is Greek hero is act of friendship between the nations!