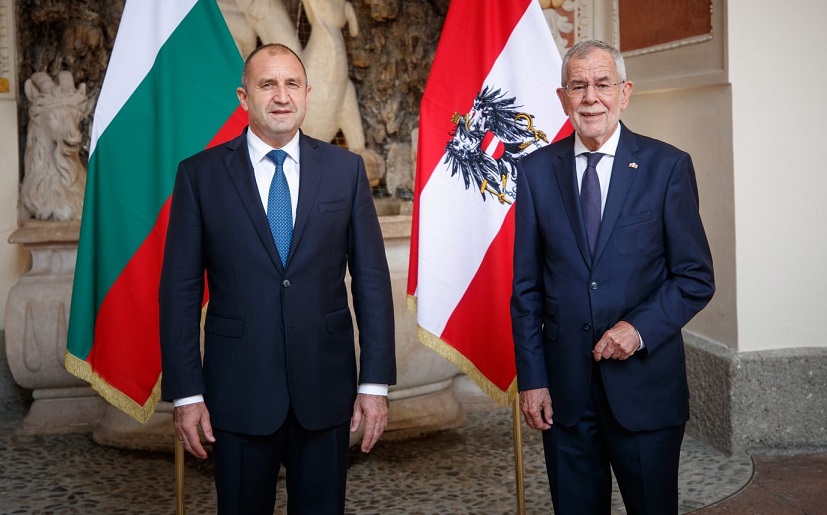 Bulgaria is the strongest supporter of EU enlargement, but it cannot allow violation of the rights of citizens of the Republic of Macedonia with Bulgarian self-awareness, said Bulgarian President Rumen Radev during a meeting with his Austrian counterpart Alexander Van der Bellen in Salzburg on Monday.

At the meeting between Radev and Van der Bellen, it was emphasized that the European integration of the countries in the region is in the interest of stability and economic development of Europe.

President Radev stressed that Bulgaria fundamentally and consistently supports the European perspective of the region, which should not be limited to the formal stages of the accession process and must not harm the interests of the Union member states and its values. Regarding the progress in the European integration of the Republic of Macedonia, the Bulgarian president said that they expect clear political will from the Macedonian side to implement the Agreement on Friendship, Good Neighborliness and Cooperation between the two countries, signed in 2017.

Although Skopje claims that they meet the accession criteria, we are still witnessing systematic violation of the rights of the citizens of the Republic of Macedonia of Bulgarian origin and their discrimination, and there is still hate speech against Bulgaria in textbooks and in public, said Radev.

According to the Bulgarian President, the progress and resolution of these issues depend exclusively on the policies of the Republic of Macedonia, with which Bulgaria has repeatedly expressed readiness to conduct a constructive and open dialogue. According to Radev, this is the way to create a climate of trust and achieve concrete and irreversible results that will lead to the start of EU accession negotiations.