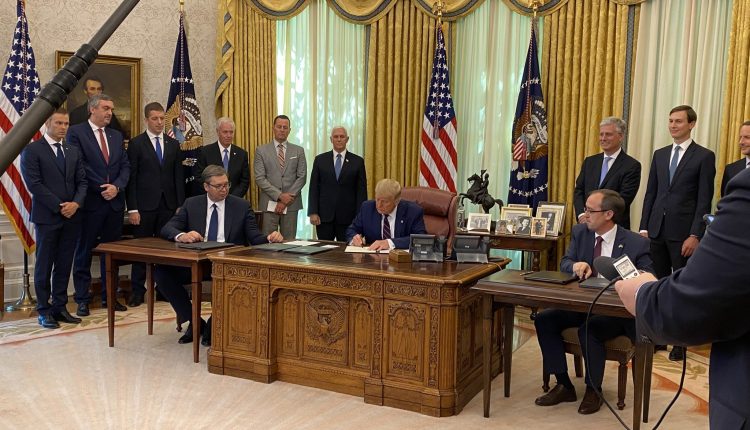 Serbia and Kosovo signed a deal for deepening their economic cooperation in Washington, under the auspices of US President Donald Trump. Simultaneously, Israel announced that it is recognizing Kosovo while Serbia announced it will move its embassy in Israel from Tel Aviv to Jerusalem.

The deal does not include a commitment for Serbia to recognize Kosovo and Kosovo will suspend its membership in international organizations for a year. Serbian officials yesterday said that the US included an article that would lead to Serbian recognition of Kosovo as an independent country, which President Aleksandar Vucic refused to do. The deal also does not include territory swaps – an idea that was discussed in the past, mainly with EU diplomatic representative Federica Mogherini, and was apparently embraced by both Vucic and Kosovan President Hashim Thaci.

The two countries agreed to jointly manage the Gazivoda reservoir and Kosovo will join the Mini Schengen initiative which also includes Albania and Macedonia. Kosovo previously refused to have anything to do with this initiative, fearing it would increase Serbian influence in the region.

The US pledges to help the two countries build a highway and a railway, as well as to provide financial support for businesses in the region.