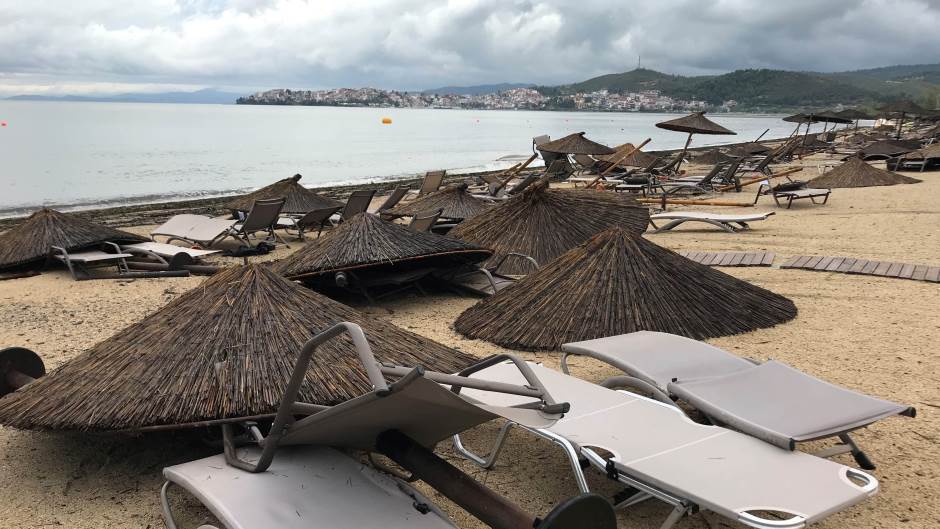 A state of emergency was declared in the northern Greek region of Halkidiki Thursday after six people died in deadly storms and gale-force winds that hit the area late Wednesday night, Kathimerini reported.

Six foreign nationals from Romania, the Czech Republic and Russia, including two children died in accidents related to the severe weather.

A Romanian woman and an 8-year-old boy died after a roof collapsed on a restaurant in Nea Plagia, and a Russian man and a young boy were killed after a tree collapsed near their hotel in the seaside town of Potidea. Elsewhere, two elderly Czech tourists were killed when strong winds and water swept away their travel trailer.

A 60-year-old fisherman was reported missing in the sea area of Kallikrateia. Nine people were hospitalized in Papanikolaou hospital in Thessaloniki with injuries related to the extreme weather, one of which is in the intensive care unit. Three children and one teenager who were injured by objects swept by the winds are being treated at the Gennimatas hospital.

Greek Citizen Protection Minister Michalis Chrysochoidis expressed his sorrow for the victims and dos condolences to their families, saying crews are working around the clock to restore damages and electricity in the affected areas.

“We will do all we can as a country to stand in solidarity with those people who lost family members,” he said after an emergency meeting held early Thursday morning in Halkidiki and hailed the “tireless” crews working to restore electricity and remove fallen trees and objects form the road network.

Defense Minister Nikos Panagiotopoulos told a radio station said the army will assist local authorities in clearing out the debris.

“The Armed Forces are ready to transfer machinery to repair damages. We will offer generators until power is restored in the first peninsula,” he said.

Authorities in the Region of Central Macedonia had started recording damages to infrastructure, houses and businesses.

About 80 percent of the Halkidiki peninsula, a region popular with tourists in the summer, remained without power, the head of the union of Public Power Corporation employees (GENOP) said Thursday.

“Huge problems were created by the collapse of a utility pole of power grid operator ADMIE on the national highway,” Giorgos Adamidis told Skai channel, adding that about 100 crew members are working to restore electricity in the area.

Adamidis said he expected power to return in most areas by Thursday night.