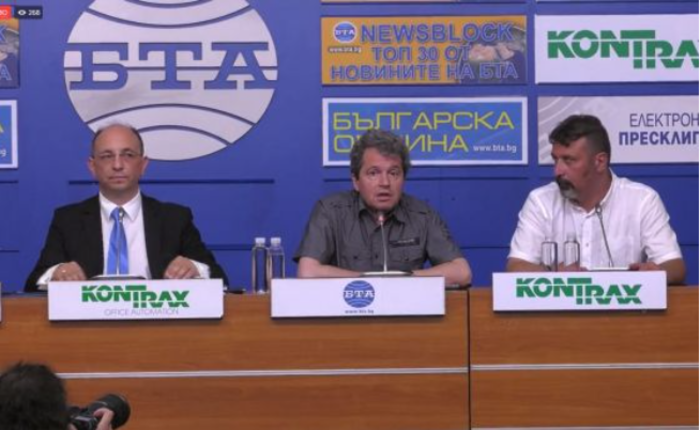 There is Such a People (TISP) party, the winner in the July 11 snap general elections, will put forward a new nomination for a prime minister and a revised government line-up “in due time” but not now. This transpired Friday during a news conference at BTA’s National Press Club where TISP were largely expected to name a new prime-ministerial nominee after they decided to withdraw their initial one, economist and former state administration minister Nikolay Vasilev.

TISP will have 65 seats in the new Parliament, making it the largest group, which will be the first one the President will ask to form a government.

The TISP news conference was held by two party leadership members, Toshko Yordanov and Filip Stanev, and Nikolay Vasilev. TISP leader Slavi Trifonov was not there.

The news conference came a day after Trifonov retracted Vasilev’s nomination and said a new PM will be sought.

Yordanov and Stanev persistently refused to answer questions about the timing of their announcement of the new PM and government proposal, or which ministers of their initial line-up will stay and which will be changed.

Yordanov also said that “Parliament is where the negotiations [among the political parties] will take place”. “We assume the responsibility for proposing a cabinet. If it wins support, it will take office. If not, the logical development is new early elections. The responsibility here rests with our colleagues in Democratic Bulgaria and Rise Up! Thugs Out!,” Yordanov said.

Yordanov said that “for TISP it is logical to have partners in the direction we are looking in, that is Democratic Bulgaria and Rise Up! Thugs Out!”. “If we fail to have the support of these two anti-establishment parties, we do not want to form a cabinet with the remaining formations,” he said.

Stanev said that “it is senseless to engage in preliminary talks with political players” about who to nominate in the cabinet. He also stressed that TISP will not engage in covert political agreements.

Yordanov said that TISP “does not want the votes of GERB and the Movement for Rights and Freedoms (MRF)”. He went on to note he suspects that some of the persons in the incumbent caretaker government are from the MRF but declined to name them.