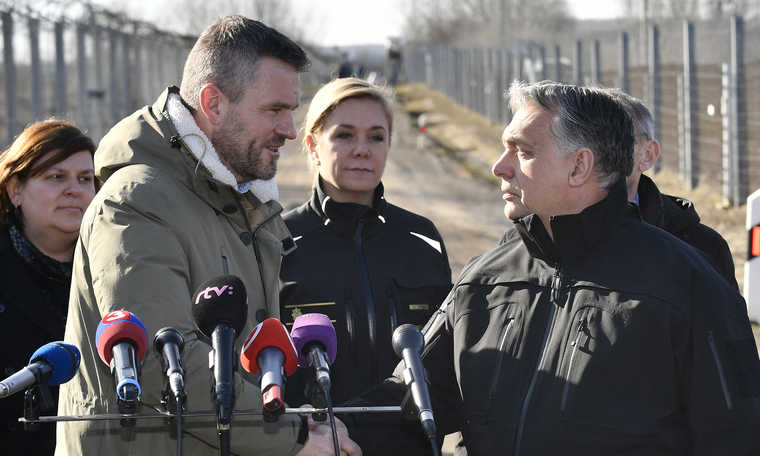 Migratory pressure on Hungary’s southern border is expected to increase as the weather improves and more and more migrants set out, Hungarian Prime Minister Viktor Orbán said on Thursday at the crossing point of Roszke on the Hungary-Serbia border, where he inspected the border barrier with Slovakia’s Prime Minister Peter Pellegrini, the V4 news agency reported.

It is not only Hungary’s but also Slovakia’s border that is protected here, the Hungarian premier told the press. This is hard work and we would have a difficult time doing it without help and allies, he said, thanking Slovakia for its support.

What images published in the international press suggest does not reflect reality as 95 per cent of the arrivals are military-aged men, Viktor Orban noted, adding that Europe would not allow it to be said that it is an “organised invasion”.

The Hungarian head of government said that he invited his Slovak counterpart to pay a visit because the situation has recently changed, and the number of unlawful border crossings has increased sharply. He added that this year alone, over 5,000 such cases have been registered, pointing out that it was not only individuals but also organised groups that had attempted to cross the border illegally. He stressed that there are one hundred thousand migrants on the Balkan routes now, intent on entering Europe, and if we did not protect the border, they would enter Hungary and Slovakia.

Viktor Orban underlined that Hungary is grateful to Slovakia’s government and to its prime minister for always giving Hungary the necessary assistance, adding that Slovakia’s police force also performs important tasks. The two countries have confirmed their agreement that Hungary can count on Slovakia’s help if the pressure on the border increases, Viktor Orban said, adding that this friendly cooperation is the foundation for a common future.

In answer to a question, the Hungarian PM said that the border is not closed, anyone wanting to enter Hungary should “knock on the door”, say what they wanted, and we will take the records and launch a procedure. Those who choose the legal way have to wait in the transit zone until the procedure is completed, will receive provision, and if their application is approved, they will be allowed to enter, otherwise they have to leave the zone, which is closed towards Hungary, but open towards Serbia, he explained.

He said, “if everyone behaved like that, life would be good,” but most of the immigrants choose the illegal way. They have recently stormed the fence in groups, and even rounds had to be fired in the air for the first time this year, he reminded. Orban noted that anyone who enters illegally will be caught by the police.

He also praised the cooperation with Serbia, which is in a difficult situation, but the two countries can handle the issue through good cooperation. Orban said that the secret service is constantly monitoring events, following closely how migrants are being organised, with “semi-smuggling organisations, so-called NGOs” behind them, which have a lot of money and significant logistical capabilities. Most conflicts are with the organised groups, he added.

In response to a question, he said: Hungary does not receive a penny from Brussels for the fence because “we are on the list of badly-behaved countries. Hungary was the first to build a fence, so we are the main culprits.”

Peter Pellegrini emphasised that that border section was also the southern border of the Schengen area and therefore its protection was particularly important. It would be dangerous if the migrants broke through here, which would also be a serious problem for Slovakia, he said. Slovakia protects its eastern border with Ukraine, but it needs Hungary’s help in the south. As the weather improves, more and more migrants are arriving, with some of them caught in Slovakia who had been brought in by people smugglers, he pointed out.

Pellegrini emphasized: Slovakia is ready to continue to allocate sufficient resources to maintain border protection in order to discourage migrants. He stated that bilateral relations were good in all areas and the two countries were partners in border protection.

Hristijan Mickoski and Zoran Zaev, the leaders of the two major parties VMRO-DPMNE and SDSM, will have to self-isolate after they were both interviewed by a journalist who tested positive on the coronavirus. Healthcare Minister Venko Filipce held a press conference this morning to inform that Mickoski...
Macedonia 10.04.20 | 10:10