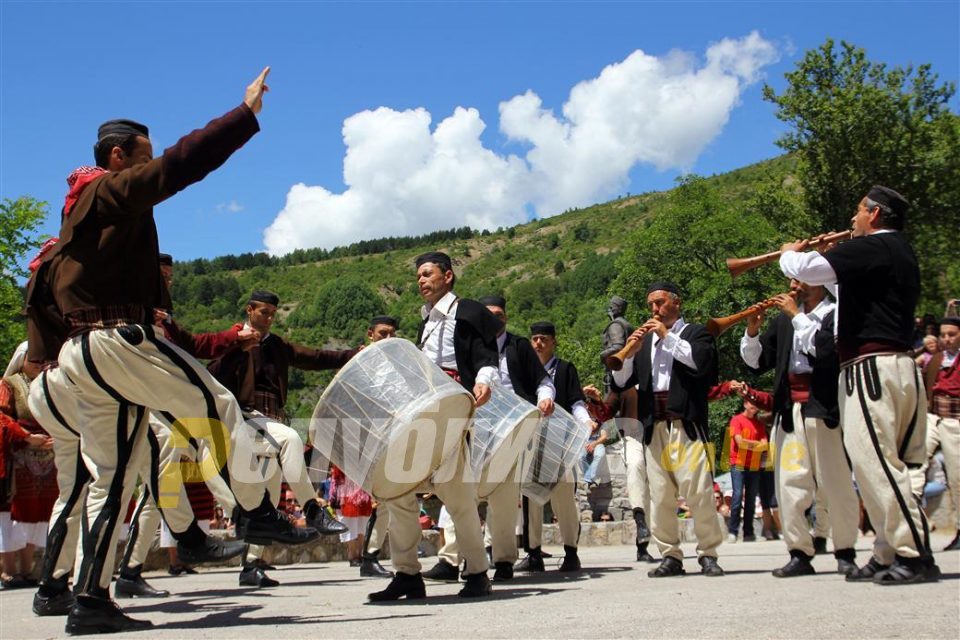 A song and three shots fired in the valley of Bistra will mark the start of the Galichnik Wedding Festival and open the season of Miak weddings. Participants in the event, which is a celebration of love, will get the chance to dance to the rhythm of centuries-old, traditional wedding melodies.

Ognen Karagjozovski and Marina Petrovska are getting married at the 46th Galichnik Wedding. The council of the local community of Galichnik was the first to congratulate the happy couple.

At this year’s proceedings, Marina and Ognen will say YES, put on a bridle, knead bread and ride a horse.

The happy couple met and fell in love while working together. Although Marina was born in Kriva Palanka and Ognen’s family comes from Galichnik, the couple currently lives in Skopje. The groom had previously taken part in the festival on multiple occasions, both as an organizer and an extra.

Over 200 people to take part in the event

The festival was inspired by the desire of the people from Galichnik to preserve the customs of the Miak region. The preparations for the big weekend are already in order. The festivities will begin with the hanging of the wedding flag and the wedding ceremony will take place on Sunday, 14 July at St. Peter and Paul Church. Over the course of the weekend (Saturday from 19:30 and Sunday from 8:30), visitors will have the opportunity to witness over 30 traditional wedding customs.

Over 250 people will take part in the event, including about a hundred hired extras, thirty members of the Folklorni biseri cultural and artistic ensemble who will perform traditional dances, a group of horse riders, and a technical support staff.  Over the weekend, traffic in Galichnik will operate on a special schedule.

Organizers have upgraded the live streaming of the event, a service which was introduced last year. This year, the proceedings will be streamed both on an LED screen at the center of the village and over the Internet.

The Galichnik Wedding Festival will take place on July 12-14. The patron of this year’s festivities is President Stevo Pendarovski, whose father hails from Galichnik.

During the festival, visitors will get the chance to witness a number of wedding customs and rituals and hear traditional wedding songs from the region.

The start of the wedding festivities is signalled by firing a rifle and decorating the wedding flag with flowers, accompanied by the sounds of traditional wedding songs.

On the other side of the village, musicians play their horns and drums, while the mother of the groom greets friends and family with homemade bread and leads them into dance.

One of the most popular customs is banishing the demons that might haunt the couple. With torches in hand, the groom together with the best man and a group of friends, escort the bride to the three village fountains where she fetches water as an unmarried girl for the last time.

The custom of inviting the dead to the wedding takes place the following morning. On this occasion, famous Macedonian writer, Petre M. Andreeski wrote the following words: “Life shouldn’t be a celebration of the living, because the dead were once alive and the living will one day die, so it’s a great sin to break up the connection between them.”

From the cemetery, the wedding party heads to the best man’s house, where the groom asks the best man for a blessing. Another interesting tradition is the shaving of the groom, which symbolizes his transformation from a boy into a man. The groom also gets his hair cut and a golden coin, which symbolizes bountiful wealth and progeny, is placed in the bundle of cut hair.

After the shaving, the wedding party proceeds to the bride’s house. Dressed in traditional Galichnik regalia, she greets the groom from the balcony. Looking through a ring, she proclaims: “Through this ring I look at you, welcome me into your heart.”

The bride is then sent on horseback to her future husband’s house. There, her mother-in-law gifts her a sieve, a loaf of bread and a jug of wine.

After the wedding ceremony at St. Peter and Paul Church, the bride is brought to one of the water fountains where she dances the traditional bridal dance and gives presents to the guests. When the wedding festivities are over, the guests start heading home, accompanied by the music of the horns and drums.

One of the most striking elements of the event is the colorful wedding regalia. The only condition for taking part in the festivities is wearing an authentic Galichnik costume.

The bridal regalia is truly unique. It’s mostly white, yellow and red, and its decorated with rich embroidery. Gold and silver filigree jewelry is also part of the costume, which can weigh up to 30 kilos.