A long list of artists who have performed in the Universal Hall called out Skopje Mayor Petre Silegov and demanded that he gives up on his plan to demolish the ageing venue in downtown Skopje.

Earlier this week the city announced a plan to demolish the concert hall, built with international donations after the devastating 1963 earthquake, and to replace it with a park that would also include an open air stage. Many have warned that the plan is likely meant to intercept and disarm the expected criticism as the near-by site of a defunct furniture factory is being opened for major development. 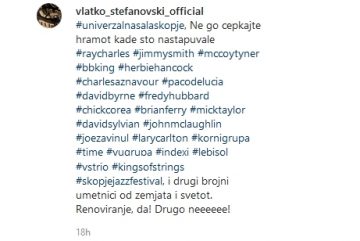 Singer Vlatko Lozanoski – Lozano said that the site holds so many memories that destroying it is not acceptable, while DJ Pancho mocked the numerous Colored Revolution activists who sit on Mayor Silegov’s staff. This group of leftist activists were extremely outspoken over every single development project in Skopje under the previous Mayor Koce Trajanovski, but have now endorsed the destruction of one of the most recognizable sites.

Mayor Trajanovski planned to have it rebuilt in a new, modernist design, but Silegov proposes that it’s moved elsewhere. Sensing the extent of the opposition, yesterday Silegov proposed keeping the current hall and building a new one at a different location.