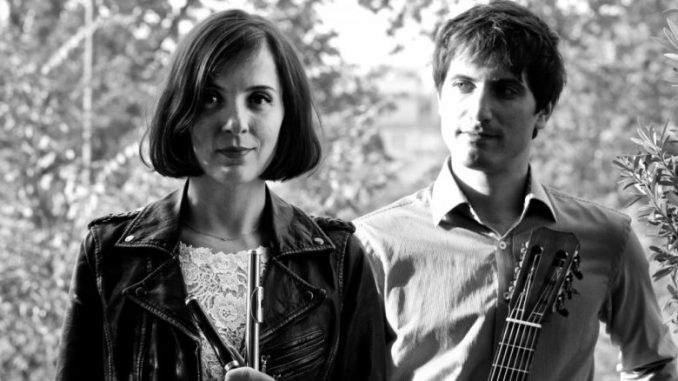 The Duo SoliPse formed in 2011, performed in various cities and festivals in France, Czech Republic, Italy, Russia and Bosnia and Herzegovina,  such as the festival of Arromanches, the “Maskfest” festival in San Marino, the “Forfest” festival in Kromeritz, international festival “Sarajevo winter”, the Scriabin museum in Moscow, the Château de Bosmelet, Châtellerault, the Festival of Sagonne, La Semaine classique au Lavoir, at the Royal museum of fine arts in Brussels and different venues in Paris and Paris region.

They premiered the piece Liebes-Lied by Massimiliano Messieri in 2016, piece composed and dedicated to duo SoliPse, as well as A dream within a dream for flûte, guitar, voice, woodblock and live electronics. American composer Laurence Sherr dedicated his Capriccioso for flûte and guitar to Duo SoliPse.

Flutist Elena Stojceska won First Prize at the 2004 AudiMozart Competition in Rovereto, Italy. Other successes in international competitions include top prizes at National Flute and Chamber Music Competitions in Macedonia (and former Yugoslavia), as well as in France at the European Competition of Music, Buffet-Crampon and Gaston Crunelle-Lucien Wurmser flute competitions.

She currently resides in Paris and teaches at the Livry-Gargan Conservatory as well as the Paris Center Conservatory – CMA W.A. Mozart.

French guitarist Romain Petiot is a prize winner of several competitions such as Guitarmania competition in Almada, Portugal and Guitar Art Festival in Belgrade, Serbia, as well as finalist of the Robert J. Vidal competition in France.

He has performed recitals and chamber music concerts in France, Italy, Czech Republic, Portugal, Russia, Bosnia and Spain and was invited at divers Festivals such as Automne Musical of Châtellerault, or Arromanches music festival, Maskfest in San Marino, the Sarajevo winter festival and by the French cultural institute of Valencia, Spain.  Romain premiered and recorded pieces for solo guitar from composers Laurence Sherr, Vincent Airault and Massimiliano Messieri.

He graduated with honors at the Ecole Normale de Musique de Paris “Alfred Cortot” and obtained a master for pedagogy from Paris Conservatory (CNSMDP). He studied with Alberto Ponce and Judicaël Perroy and attended masterclasses with David Russell, Zoran Dukic, Lorenzo Micheli, Pavel Steidl and Carlo Marchione among others. Romain was born in 1987 and currently resides in Paris where he teaches at the l’Haÿ-les-Roses Conservatory.