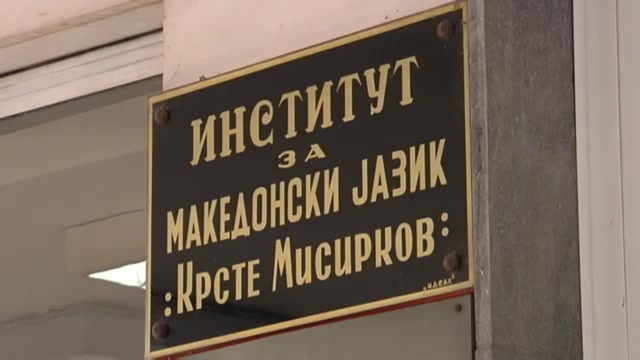 The books to be published in digital format are:

— On the Macedonian Language (Book 11 of the Institute’s Special Editions imprint, 1978), edited by Todor Dimitrovski, Blazhe Koneski, and Trajko Stamatoski;

— Eight Almanacs (beginning from Book 2 of the Blagoja Korubin Days series), edited by Snezana Velkovska (some already available on the Institute’s webpage; some forthcoming), and

— Dictionary of Macedonian Last Names, in two volumes (1994, 2001), as a phototype edition; by Marija Korobar-Belcheva, Olga Ivanova, Marinko Mitkov, and Trajko Stamatoski, and edited by Trajko Stamatoski (the onomastics expert whose 95th birthday the Institute is celebrating with this publication).

The e-books are the first to be published digitally since the online publication of the Orthography, which was made possible with the support of the government, the National and University Library, and the authors, the institute says.

“Which is why we’re asking the government and the relevant institutions to support us,” Jovanova-Grujovska adds. “It’s time for digitalization and electronic publishing! Let this year’s Macedonian Language Day be a further incentive to do it!”

Over 6,500 languages exist in the world, she notes, yet “only a few hundred of them have been elevated to [the status of] an official language of a country, and the language of the Macedonians is one of the chosen ones.”

“As early as the ninth century,” Jovanova-Grujovska writes, “the brothers Cyril and Methodius, using the Glagolitic script, translated church books into the language of the Macedonian Slavic people living near Thessaloniki (a language known among scholars as Old Slavonic and Old Macedonian).

“With the Pope’s blessing, this language became the fourth language in the world to be recognized as worthy of honoring the Bible and God. Later, gradually, Cyrillic letters took their place in the written tradition.

“Many centuries later, when Federal Macedonia was recognized as a state, the first ASNOM [Antifascist Assembly for the National Liberation of Macedonia] session on Aug. 2, 1944, declared Macedonian the official language of the state.”

The Macedonian alphabet was officially adopted by the People’s Government of Federal Macedonia on May 5, and its Orthography on June 7, 1945, which codified the contemporary standard Macedonian language, she highlights.

The Macedonian alphabet is the official and only alphabet of the Macedonian language, in which thousands of books have been printed and read by Macedonian-speaking people worldwide, she continues.

Krste Misirkov Macedonian Language Institute keeps rising to the tasks of promoting, nurturing, and researching the standard Macedonian language, according to Jovanova-Grujovska.

For seven decades, the institute has published numerous doctoral and postdoctoral theses, and various other works to promote the Macedonian language and its alphabet, its phonetic orthography principles, its grammatical forms, and its central dialect’s “living suffixes” (as Blazhe Koneski called them), as well as to enrich the language corpus by welcoming words from various vernaculars, she adds.

“Our 75-year practice of writing in the Macedonian alphabet and according to its orthography has contributed towards overcoming illiteracy, improving the quality of education and our citizens’ lives, promoting Macedonian cultural diversity and keeping our ancestral tradition alive.

“With a sense of piety,” the director says, “we remember all our predecessors whose work embedded them into the written Macedonian language.

“One of them is the visionary who was the first to bring our alphabet into the light of day, our patron Krste Misirkov, who reminds us that ‘language is our spiritual wealth,’ because ‘language is the instrument helping us comprehend the thoughts, feelings, and desires of our interlocutor.’”

In her message on the occasion of Macedonian Language Day, Jovanova-Grujovska also honors “the codifier of the Macedonian language and the biggest promotor of the Macedonian alphabet, Orthography and Dictionary, Blazhe Koneski, who told us ‘the language is our only undivided homeland.’”