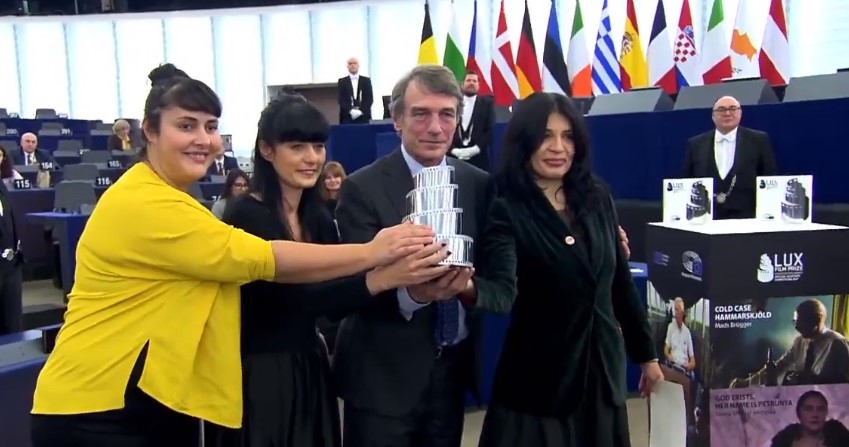 This is the first Macedonian film to win the award since it was introduced thirteen years ago. ‘God Exists, Her Name Is Petrunya’ is a co-production of Macedonia, Slovenia, Belgium, Croatia and France.

Other films shortlisted for the 2019 Lux Film Prize were Mads Brügger’s ‘Cold Case Hammarskjöld’ and Rodrigo Sorogoyen’s ‘The Realm’.

Ljubomir Stefanov and Tamara Kotevska’s ‘Honeyland’ was also a part of the competition’s official selection, which says a great deal about the quality of Macedonian productions.

Petrunya touched so many hearts thanks to her strength and bravery,”Mitevska said during the ceremony.

I’m often criticized for being too political, but the truth is that as an artist I’m interested in the what goes on in the society. It’s my duty to talk about issues no one dares to address, she added.

The delegations of the three short-listed films previously took part in a LUX seminar together with filmmaker Oleg Sentsov, who received Tuesday the 2018 Sakharov Prize for freedom of thought.

The LUX Film Prize winner is chosen by MEPs, after they watch the films selected by experts from EU member states.

The EP covers subtitling expenses for the three short-listed films in the EU’s 24 official languages and makes a digital copy of the films for each of the member states.

The LUX Film Prize was introduced in 2007 and aims to promote European cinema and facilitate the diffusion of European films in the European Union. It also stimulates debate on major political and social issues on European level. The winning film will be adapted for audiences with impaired sight or hearing, and will be additionally promoted.

God Exists Her Name is Petrunya