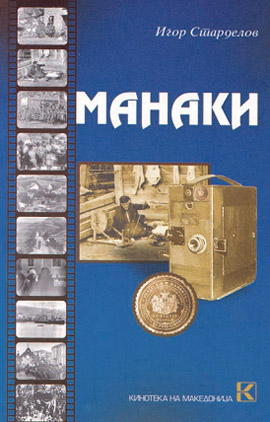 The Cinematheque is continuing to “distribute” some of its editions via its website, making some available to the wider public, its audience, and anyone curious to find out more about local and foreign cinematography.

Besides every issue of the Kinopis magazine of film theory and film history, the Cinematheque has now given its readers access to Igor Stardelov’s monograph Manaki (Cinematheque, 2003), as well.

According to the publisher, the monograph is an extensive scholarly study of the first Balkan-born filmmakers—the brothers Yanaki Manaki (1978-1954) and Milton Manaki (1880-1964) and their lasting legacy—bringing fresh insights into their photographic work, their filmmaking, and their movie projections.

“Though six chapters,” the Cinematheque says in a press release, “not only does the author look at the Manaki brothers’ biographical moments and their creative oeuvre but also critically demystifies certain historical facts and claims about their life and work.”

“[It also] analyzes the contents and structure of their films and elements of expression, such as their editing, their structured and chronotopic frames, the semiotics of their film images, the kinaesthetic characteristics of their mass scenes, etc.,” the Cinematheque points out.

In addition, Stardelov, in a special appendix in the book, talks about the challenges of the chemical processes relied on to restore and protect the film tapes of the Manaki brothers.

In 2014, Stardelov’s Manaki monograph was translated into Turkish and released in Istanbul as a collaboration between the Cinematheque and ESR Film Yapim.

Igor Stardelov (b. 1963) is the Cinematheque’s Head of Film Archive. He has published a number of scholarly papers in local and foreign film journals and has also managed the restoration and digitization of the movies made by the Manaki brothers, a project financed by the Ministry of Culture.

After restoring and digitizing the movies made by the Manaki brothers, the Cinematheque issued them on DVD in 2014.

Rumena Bužarovska play premieres in Slovenia: Women shouldn’t have to be superheroes to be equal