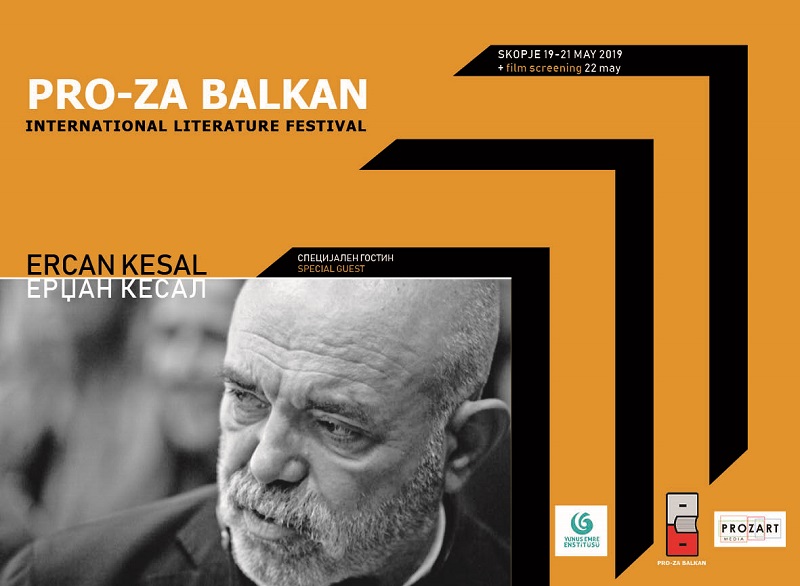 The great Turkish writer, actor and screenwriter Ercan Kesal will be a special guest at the 7th International Literary Festival “PRO-ZA Balkan” in Skopje. The audience will have the opportunity to see one of the screenwriters and actors of Nuri Bilge Ceylan’s ”Once Upon A Time in Anatolia”, the film that won Cannes Grand Prix in 2011, on May 20 from 17:00 to 18:00 at the Turkish cultural center “Yunus Emre”, at the meeting dubbed

“Ercan Kesal in Skopje!” Although he is busy filming this period, Kesal expressed a great desire to come to the festival and stay at least for a day.

Kesal also stars in the Turkish series “The Pit”, which is very popular among the Macedonian audience these days.

My writing does not come from anything other than my experiences. The question is how should I connect with them? Whenever I write, the abyss in which I lean and gaze is nothing but the deep darkness in me. Hence, whatever I do, is a revised and regenerated reflection of the complicated material embedded into my memory. I am writing by “creating again” all that remains of what I live, see, hear and read. What remains, it remains, Kesal told Macedonian media.

Ercan Kesal is a writer, actor and screenplay author from Avanos (Nevşehir), where he was born in 1959. In 1984 he graduated from Ege University’s Medical Faculty. After years of practicing medicine, he started training in practical psychology and social anthropology. His contemporary stories and articles have been published in Turkish broadsheet newspapers such as Radikal and BirGün; furthermore, Kesal wrote screenplays for Turkish films. He started his acting career in the adventure movie Uzak (“Distant”), and continued to appear in many movies as an actor or scriptwriter, most notably in Bir Zamanlar Anadolu’da (“Once Upon A Time in Anatolia”), taking part in the 2011 Cannes Film Festival.

His latest novel ”Evvel Zaman” (Ancient Times) is a diary book describing the formation process of Bir Zamanlar Anadolu’da (”Once Upon A Time in Anatolia”) and it was published in 2014 by Ithaki Publishing House. “Peri Gazozu” (Fairy Soda) is a collection of stories about the simplest and yet most enchanted and enchanting aspects of life – living and dying, growing pains and the frustrations of ageing, the sometimes difficult but ultimately loving relationships within a family – told through the eyes of a many various characters. His novella “The Potential Candidate” was published in 2015 by İletişim Publishing House. “Mirror of Gin” was published in 2016 by İletişim Publishing House. His other books include “Aslında” (In Fact), “Zamanın İzinde” (In the Pursuit of Time) and Tanıdığım Metin Erksan (Metin Erksan, The Way I know Him).