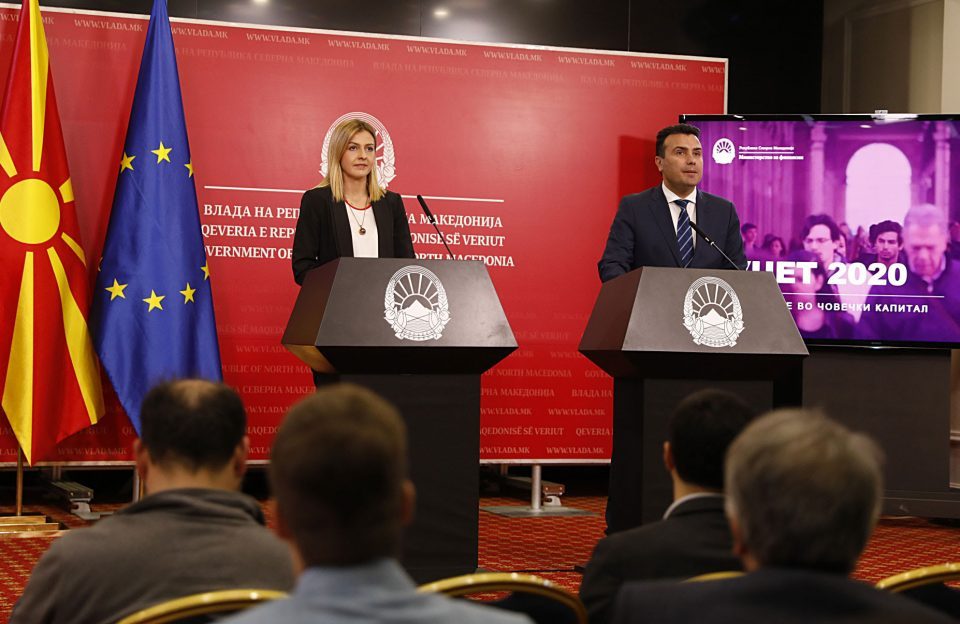 The 2020 budget will amount to 3.615 billion euros, and the focus will be on human capital, better healthcare, education and social system and strong support for real sector growth. Fifty-six percent of total budget spending will go to areas that rely on human capital.

This is the proposal that received the support of the Government, and Prime Minister Zoran Zaev and Minister of Finance Nina Angelovska present it at Tuesday’s press conference.

The prime minister emphasized that when creating policies the focus will be on citizens and the growth of the standard and that next year’s policies will be dedicated to human potential.

It was taken into account where citizens’ money will be the best and the most productively used for the benefit of our citizens. Capital investments remain more than 23 billion denars, which is the usual budget item. To be tailored to the citizens, the budget is an investment in people, in human capital, said Zaev.

Minister Angelovska assessed the proposed budget for next year as realistic.

The reason why the focus is on supporting human capital, ie investing in citizens and creating better living conditions, is the challenge we face as a country: to maintain and upgrade our human capital. If we do not invest in human capital continuously, as a country we will not have the workforce ready for the jobs of the future, we will not be competitive with the world economy and we will not be able to sustain economic growth, Angelovska said.

Angelovska also pointed out that the budget deficit for 2020 is set at 2.3 percent, or lower than this year for which the deficit is projected at 2.5 percent and 2018 when it was 2.7 percent. This, according to the minister, is an important indicator of the strong commitment to fiscal consolidation, followed by further budgetary discipline and the provision of significant fiscal space to support the domestic economy and citizens and infrastructure projects.

Budget projections are based on the projected growth of 3.8% of GDP in 2020, based on growth in private consumption, exports and investments – public and private.

The 2020 draft budget will be submitted to the Parliament.