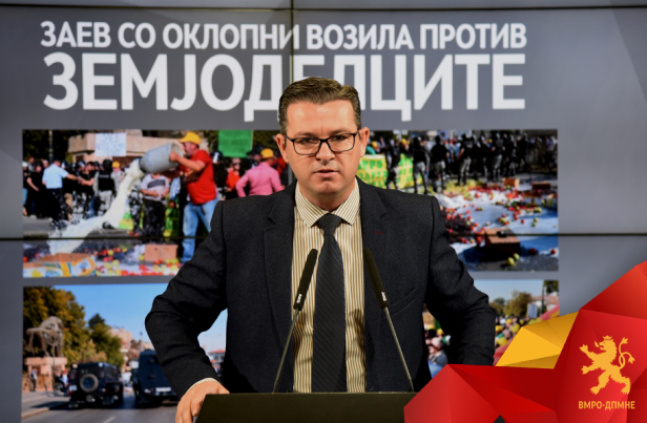 Cvetan Tripunovski, Deputy Minister of Agriculture, Forestry and Water Economy from VMRO-DPMNE, accused Friday SDSM of bribing farmers with their money, which they have not received yet. According to him, this casts the darkest stain on the election and is a brutal insult to the honor and dignity of working farmers.

SDSM through Trajan Dimkovski wants to bribe the farmers with 60 million euros, with money of the farmers that they have to receive in accordance with the law, and have not been paid for the past three years. We alerted and pointed out that there is a gap of 100 million euro in the paying agency, subsidies that the authorities owe to the farmers for the years 2017, 2018 and 2019. The government denied and lied. Trajan Dimkovski and SDSM said that there were no unpaid subsidies when farmers came in front of the cameras and said they were not paid subsidies, accusing them of lying, when I pointed out that tens of millions of euros from 2017,2018 and 2019 were not paid to farmers, Cvetan Tripunovski said.

On December 28, the government adopted a Program for Financial Support to Agriculture which envisages 20 million euros to be allocated to cover arrears in 2020.

On January 10, Traian Dimkovski, requesting changes to the Program, requested the government to reallocate an additional 40m euros. They first manipulated the entire public by saying that only 20m euros had not been paid and then to admit after 14 days that they were lying. Ljupco Nikolovski and Trajan Dimkovski did not pay for three years, nor will they pay now. The payments they make are aimed at pre-election bribes of 60m euros, money that farmers should receive in accordance with the law, Tripunovski added.

Two healthcare inspectors charged with demanding a bribe from a doctor