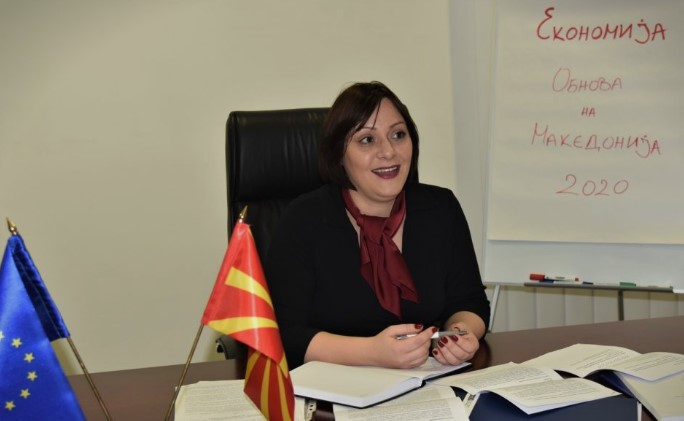 Gordana Dimitrieska – Kocoska is the interim deputy minister of finance proposed by VMRO-DPMNE. She says that it is an honor, but also a great responsibility for her, in such difficult times for the Republic of Macedonia to influence the macroeconomic flows.

In an interview with Netpress she explains the country’s financial condition, as well as the state of the economy, and answers questions about how economists, experts and businessmen rated last year as bad economically. Then, because the planned growth was not achieved, the announced foreign investments were not realized, it failed in capital projects … Populist measures artificially raised the standard (growth of salaries and employments in administration, higher pensions) … which should in itself be the result of positive economic trends.

What is your assessment of last year’s economic situation?

We had a devastating economy with bad results. To begin with the latest World Bank data which in its global economic report clearly stated that Macedonia in 2019 will grow by 3.1% which is below the average of Western Balkan countries which is 3.2%. The expected growth of 3.5% for this year obviously will not come true and this is the third year in a row that we have optimism only in words, but not in deeds.

But what is more worrying to me is the fact that business in Macedonia is sinking and insolvency is growing. There is a serious non-performance of profit tax, of 24.5% compared to the plan and 21.7% compared to the previous year. This is a clear signal that there is growing pressure on business, which is the sole driver of the economy.

Where were the key mistakes that constrained development, were political developments the main brake?

The unstable economic environment, passing laws without consulting the business community… In the end it is more than obvious that business has lost confidence in the government. On top of that, budget users have not implemented capital investments as planned, which signals to the economy that the government itself does not believe in progress. There have been and there will be political developments. There are all kinds of affairs in many countries around the world, but economies do not behave like this. If there is a stable tax policy, a functioning legal system, independent of the politics, an efficient judiciary, there may be stagnation, but not such dire results as in the case of business gains, investment decline and the like. In my opinion, the main brake is the fact that institutions do not work.

The government projects growth of 3.8% this year. How realistic is it and what preconditions are necessary, reforms, the rule of law, crime and corruption…?

Unfortunately, I trust the World Bank projections at the moment, and they are well below ours. Greater growth should be a result of the conditions in the economy created by the state, a positive business climate, an efficient state, the judiciary and the like. We don’t have that right now.

What should be given priory this year?

The starting point is to have a seriously high rate of realization of capital investments, as they are directly correlated with the amount of GDP. However, investments with high added value must be prioritized. In economics there is a cost benefit analysis (how much you get for your investment) that must be made for each project. At the same time, it is logical that it is in the interest of the state to finance projects that will have less or no added value, but therefore there are various combinations of realization, in order to maximize the budget, with the lowest borrowing rates.

There is huge damage. The analysis of personal income tax on salaries and other personal income – salary income, showed that there is an increase of one billion denars. So the business was additionally burdened by that, because by law, the personal income tax is paid by the payer, the company. Instead of leaving money in the business and motivating him to invest, we take it. And to emphasize, salary is not a measure of who is richer and who is poorer.

What effects can be expected from personal income tax reductions of 15 per cent for higher salaries of 90,000 denars to 10 per cent?

Personal income tax reductions can only produce positive results. I have already said, the more money left in business, the better the business climate in the country. The more the judiciary works, the better. In this context, the question is, does anyone know how to manage my money better than I do? Of course not. Let’s leave the money to the business and create working conditions for it. It knows best how to use them.

Macedonia has an election year ahead and politics will be in focus again. What is the position of the economy if it is known that the election years have had a negative effect so far and the economy is almost dying during elections?

Will there be investment restraint and precaution for both domestic and foreign companies (new and existing)?

Until the elections, I do not expect any positive trends in investments, job creation and the like. Unfortunately, practice in the past 29 years has shown that there is a stalemate before elections across the country. Things are set right now, so business depends too much on politics. Let me be clear, when there are unstable economic policies, everyone will be scared about their future. As a state, we have not yet learned that there are some interests that should be outside the political.

What can full-fledged NATO membership bring on economic plan?

Our people are known for a saying: “Every miracle lasts only three days“. I think that joining NATO will be just that. Investors are not guided solely by the fact that the country is a member. If a stable economy, an efficient judiciary, consistent tax laws and the like are not guaranteed, why would someone invest? We must understand that businessmen in the West are thinking of fertilizing their capital and that is their only justification for investing. Everyone wants to earn. It is a fact that NATO will guarantee political stability that will help revive the economy. But that’s just one segment.