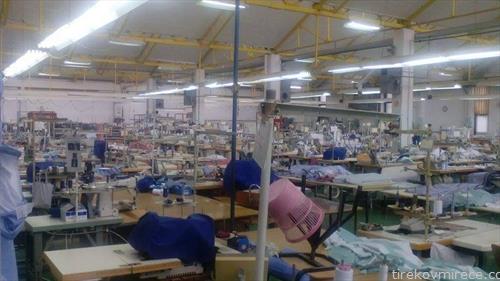 A report was filed with the Veles labour inspectors by the far left Levica party, which claims that the owner of a textile factory broke the law when he announced the firing of 250 employees. The news comes as the Zaev Government plans yet another hike in the minimum wage which hits the textile industry, and company owners demand that labour laws are relaxed in order to allow them to stay afloat and compete with the Asian manufacturers.

Leftist party wants the Government to seize the textile industry

Sasko Krstevski, the manager of the Stobi textile factory, is being protected by the institutions of the state as he willfully threatens his employees. Workers have told us that 250 of them are being fired without a severance package, and will be left without healthcare insurance ahead of the holidays, Levica said. The workers were told they will be fired over the next several months.

The party claims that the factory owner under-reported the hours his employees worked and that this will affect their ability to claim retirement income years down the road. “Some of the workers received direct threats from the manager that if they sue him, it will end badly for them”, Levica added.

Constitutional Court accepts Levica’s initiative on the Law on Languages

Workers in Novaci are being ordered to move metal rolls weighing 1.5 tons by hand, union claims