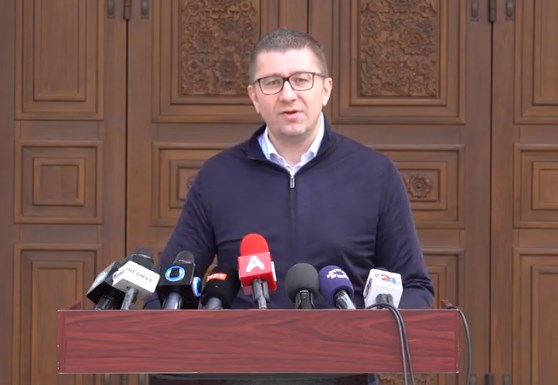 Opposition leader Hristijan Mickoski warned that every household in Macedonia will be 1.500 EUR deeper into debt by the end of the year as result of the coronavirus epidemic and the mishandling of the economic response.

Most of the stimulus funds went to large companies, while small and mid sized ones are barely making ends meet. And then we have the third package of measures that the Government is timing just ahead of the elections, and whose purpose is to manipulate the vote. In reality, the businessmen are realizing that no serious aid is coming under the Zaev – Spasovski Government. And the citizens are failing to see any benefit from the unproductive spending of money, Mickoski said, pointing to the dismal numbers of use of the funds that were made available to the companies.

The debt has grown by 1,8 percent of GDP in the first four months of the year alone, before the full extent of the economic crisis, Mickoski said, and every household is 1.500 EUR depeenr in debt. According to the opposition leader, Macedonia will need to service over a billion EUR in debt by the end of the year, even without adding additional stimulus programs to prop up the economy.

We must stop with the one-off ad hoc measures and we must introduce a serious plan and a serious strategy. We offer that to the citizens, how to begin to develop the economy after the three years long “pandemic” under this SDSM leadership, Mickoski said.

VMRO-DPMNE: In the economy part, Zaev’s government only knows of price hikes and borrowing

Public debt reached 7.4 billion euros, only in the last three months it has increased by another 213 million euros

VMRO-DPMNE: We will ban the import of tobacco until all domestic production is purchased

Mickoski: We will build a highway from Skopje to Prilep through Babuna