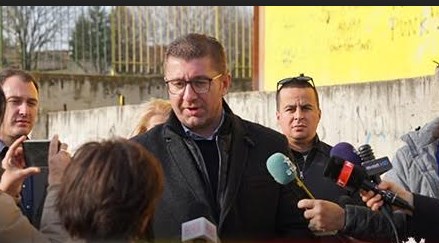 VMRO-DPMNE leader, Hristijan Mickoski, said Wednesday after the meeting with representatives of the Regional Chamber of Commerce in Bitola that if the Government accepts the two active measures proposed in this regard at today’s press conference in Parliament, VMRO-DPMNE will support the continuation of the energy crisis.

We cannot support the continuation of the energy crisis. We can support or not support the introduction of a crisis situation due to the problems with electricity, ie energy in the country because that first period has expired and now it should be continued.

Today we had a press conference in the Parliament where we proposed two active measures that should be immediately adopted by the state and the Government. The first is a subsidy on electricity bills of citizens and the businesses in the amount of 15 billion denars or a minimum of 250 million euros in addition to the initial 4 billion and 65 million to avoid a price shock and increase electricity bills of citizens and households. Instead of stealing, they should return the money where it is needed, and that is for the citizens and the economy, ie the business community, Mickoski said.