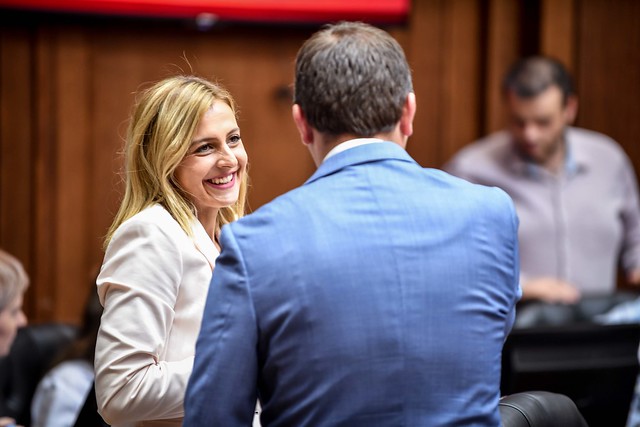 Prime Minister Zoran Zaev and his newly appointed Finance Minister Nina Angelovska presented a proposal to redistribute the budget for the remainder of the year, which cuts 50 million EUR from a number of already stalled infrastructure projects.

The Government is notoriously bad at building infrastructure and, half a year in, has managed to spend barely a quarter of the funds allocated for infrastructure. The proposed budget “rebalancing” act acknowledges this situation and cuts 50 million EUR from this outlay, most of it in railroad construction.

Zaev’s big reveal in the budget proposal is to introduce subsidies for companies who decide to increase the salaries of their employees. The proposal will last over three years and about 8 million EUR are provided in the rebalancing act.

The offer stands for private companies who hike the salaries of their employees from 10 to 100 EUR per month, but, curiously, it will also apply to public sector institutions who increase the salaries. This would come on top of the planned 5 percent hike of salaries in the public sector.
Zaev presented the move as something which will help reduce the unofficial economy where, due to the high and growing taxes on the salaries, many companies pay their workers partially or fully in cash. The opposition VMRO-DPMNE party noted that Angelovska was strangely quiet during this portion of the press conference today, as she was accused of paying her own employees “under the table”. Angeloska is the owner of Grouper, a company based on the Groupon model.

It’s absurd that the Prime Minister speaks of companies paying their employees in cash, and his Finance Minister is forced to look down as he does. Zaev and Angelovska re not running an ajvar plant or an e-commerce company now, they are running the country. What Zaev calls cash economy is a crime and constitutes tax evasion, VMRO-DPMNE said in a press release.