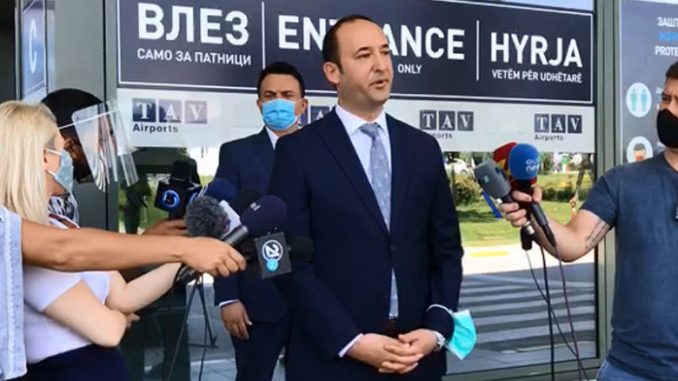 Skopje International Airport and Ohrid St. Paul the Apostle Airport are to reopen Wednesday and Thursday respectively with Wizz Air flights, The first set of tourist are expected to arrive at the Skopje airport from the Netherlands and Poland in mid-July, TAV Macedonia General Manager Alper Ersoy said on Monday.

Flight protocols have been designed in line with international standards. Ersoy noted that passengers will have to arrive at the airport three hours before their flight, as protective measures will prolong security checks.

Limits have not been imposed on the number of passengers per flight, Ersoy added, as this would be unprofitable, but passengers will be obliged to wear face masks for the duration of the flight and cabins have been equipped with HEPA filters that destroy 99.9% of viruses and bacteria.

“Flying will become the safest way to travel,” Ersoy said.

He added that Turkish Airlines, LOT Polish Airlines, Pegasus Airlines, Edelweiss Air and Czech Airlines will resume flights from Macedonia’s airports on Wednesday, while Austrian Airlines and Croatia Airlines will do the same mid-July. Meanwhile, Qatar Airways and flydubai have cancelled all flight until the end of August. Airport authorities expect a decreased amount of flights and passengers in coming months.

Health Minister Venko Filipce, who visited together with Minister of Transport and Communications Goran Sugareski the Skopje airport on Monday and met with airport management, confirmed that Macedonia’s two airports will reopen on July 1.

He told reporters that he is set to talk to his Greek counterpart Monday about the reopening of the Evzoni border crossing, adding that he has already discussed with EU health authorities entry of Macedonian nationals in EU member states and will discuss the issue with them again on Tuesday and Thursday.

“Protocols at the Skopje airport are in line with international standards. Basic protective measures, such as social distancing, face protection, etc. have been implemented. A thermal camera has been placed at the airport’s entrance and the isolation room will also become operational,” Filipe said.

Only passengers, he added, will be allowed to enter the airport building, thus reducing significantly the risk of large crowds gathering.

Airports reopen July 1, passengers to arrive at least 3 hours before their flight

Government yet to make decision on reopening borders, airports

Sugareski: It is still early to open the country’s airports