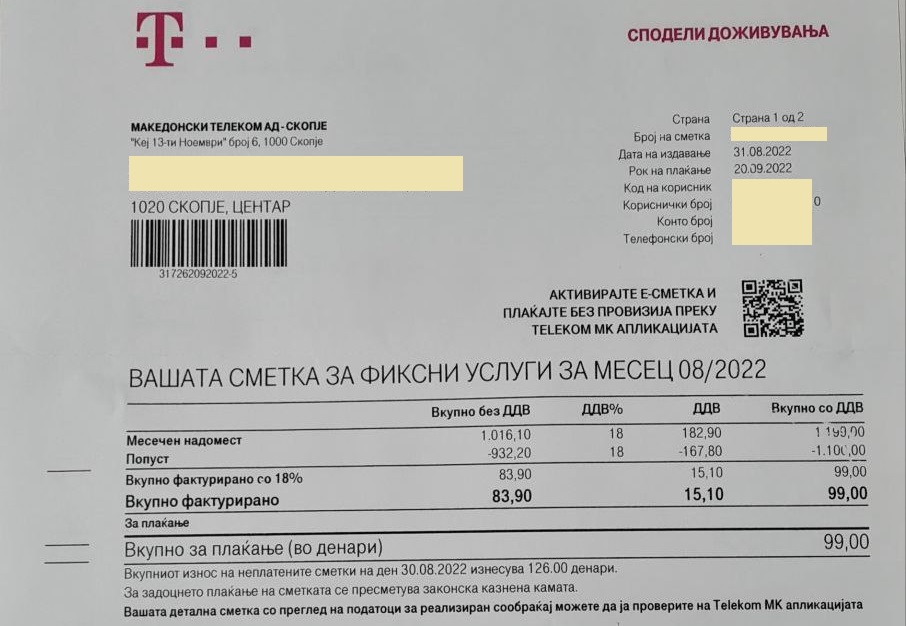 Users of Telecom services were surprised today by call center operators who informed them to settle the debt by tomorrow. Readers who complained to Republika agreed the operators were rude and rang several times a day.

They have been calling me all day from the call center, and even brazenly, without the operator introducing themselves. You have a debt of 126 denars, you should pay it by tomorrow, he tells me rudely, our reader testifies. I’m not telling you, he told me when I asked who was calling and if he could put me in touch with someone in charge of the call center so that we can understand each other, adds the outraged reader of Republika, who called our editorial office to complain about Telecom’s attitude.

Our reader says that he has been a user of the landline and mobile phone services, but also of the company’s internet services for 25 years, since the very beginning of mobile telephony in Macedonia.

During vacations, I scheduled the payments to be made so that I wouldn’t be late. All the phones at home, at the company, the internet at home and at work, the phones and the internet at my parents’ – everything is from Telecom and I have never been late paying even a minute. The account they called me about is internet from a holiday home. I started using that service in the spring, but since we don’t use that internet often, and the flat fee is 99 denars, which is the same as the commission in the bank. I pay for several months at a time. But they can see it. After so many years of using their services only, I also learned what data is available to them by entering my number, says the user of Telecom services.

Another reader had a similar experience. He says, of course, they will calculate interest for him.

They can shut me down, they won’t forgive me the interest. And it happened that I was late, but so far they have not called on the 21st of the month to order me to pay my debt in one day. Imagine, on the 21st they call me to pay it by tomorrow! Are debts of 20, 50 and 100 denars so important to Telecom, asks the reader, whose debt was less than 100 denars.

Macedonian Telecom is one of the few companies that make tens of millions of euros in profit per year despite the covid crisis and the energy crisis. Telecom achieved positive results in 2020 and 2021. Sales revenues in 2020 have increased by 2.3 percent and amount to 11.085 million denars, i.e. 200 thousand euros.

In the first half of 2022, however, the company’s sales revenue increased by 8.9 percent compared to the previous year and amounted to 100 million euros.