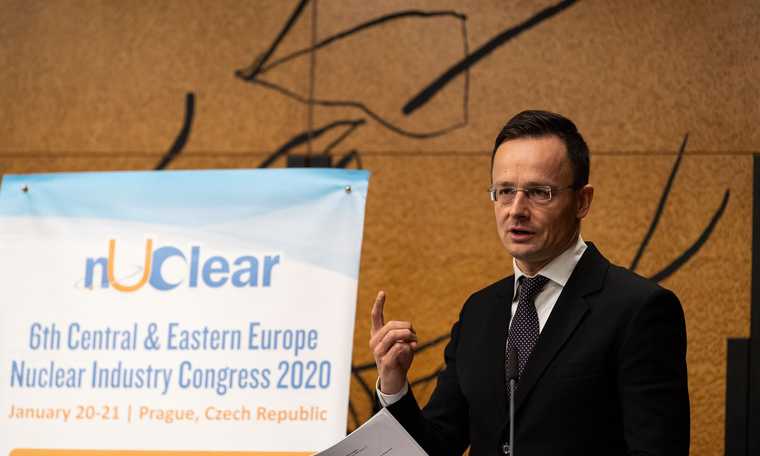 Without nuclear energy Europe cannot achieve climate neutrality by 2050, so the EU must end its negative discrimination of nuclear energy, Hungarian Foreign Minister Peter Szijjarto said at the Central & Eastern Europe Nuclear Industry Congress in Prague on Tuesday. He said the construction of two new nuclear reactors in Hungary, with the help of a Russian main contractor and US, French and German subcontractors, has provided a “platform for very significant east-west cooperation”, the V4 news agency reported.

Peter Szijjarto said the EU must not only ensure uniform criteria, but even promote nuclear energy, and argued that nuclear power plants can produce electricity safely, in a “green”, cheap and predictable way on the long haul. According to the foreign minister, Hungary is a leader in combating climate change and its nuclear projects will allow 90 per cent of the country’s electricity production to be carbon-neutral by 2030.

“This is a unique achievement in all of Europe,” Mr Szijjarto said, adding that “there were only 21 countries in the world that have been capable of achieving growth while also reducing their emissions of harmful gases.” The minister said Hungary has made it clear over the past decades that it is serious about its use of nuclear and clean energy. Hungary’s upgraded nuclear power plant in Paks will help save 17 million tonnes in carbon emissions, he said, noting that Hungary’s transport sector produces an annual 12 million tonnes in CO2 emissions. In other words, he said, “the two new blocks in Paks will help save 1.5 times that amount.”

The minister pointed out that the expansion of the Paks Nuclear Power Plant in Central Hungary has become a joint multinational effort, with contracts being awarded to large companies such as US General Electric, France’s Framatome and Germany’s Siemens, besides the project’s main contractor, Rosatom. “It’s a large-scale international project. We are proud that it has provided a platform for very significant east-west cooperation in a progressive and sensitive sector, such as nuclear energy”, Peter Szijjarto said, adding that the Hungarian government will launch a new scholarship program to teach nuclear engineering to 50 foreign students each year.