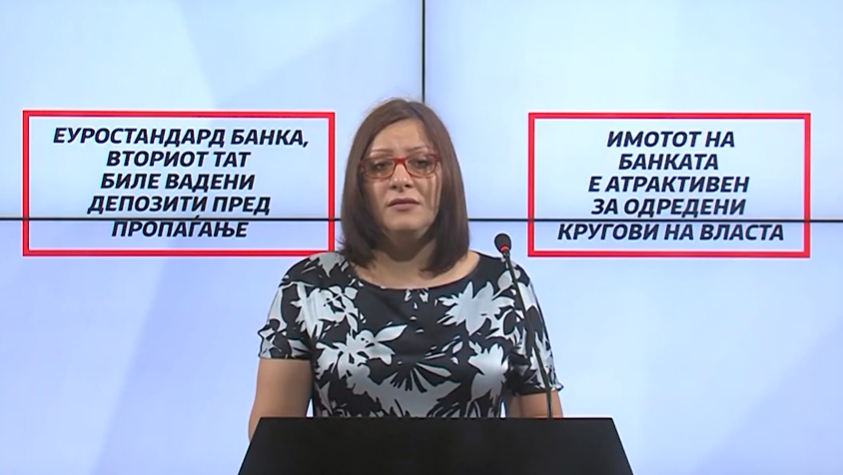 Prosecutors need to investigate whether companies from Strumica, linked to the SDSM party, took up credits worth over 55 million EUR from the Eurostandard Bank, said Gordana Dimitrieska – Kocoska from VMRO-DPMNE. With the collapse of the bank owned by oligarch Trifun Kostovski, 200 million EUR worth of deposits could be lost, and recuperated partially from public funds. Giving credits to companies that have no proper collateral or business plan as the bank is collapsing is a way to extract money from a bank that has been practiced in past bank collapses in Macedonia.

The real issue in this scandal worth 200 million EUR is how were bad credits approved and why did three financial oversight institutions ignore this issue? It is true that over 55 million EUR incredits were given to companies, including from Strumica, who are close to the Government? The public needs to know which companies got credits without offering proper collateral or with unrealistically appraised collaterals, Dimitrieska said.

She added that SDSM party leader Zoran Zaev publicly confirmed that he knew about the poor state of the bank, while Finance Minister Nina Angelovska withdrew her large deposit of 250,000 EUR from Eurostandard. Dimitrieska said that she is shocked by the decision of the State Anti-Corruption Commission not to propose a criminal investigation into Angelovska’s actions. The Commission said that the Minister should face just an ethical probe.

An outstanding issue here is whether the actions of the Central Bank with regard to the bank were deliberately being delayed so that political insiders can quietly and incrementally withdraw their deposits in time, Dimitrieska said. Taking action sooner could have saved some of the deposits, Dimitrieska added.