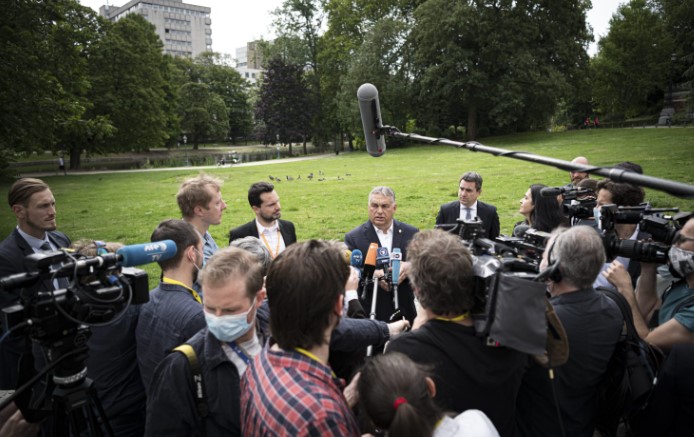 Three days of intense intergovernmental negotiations at the EU Summit have failed to yield an agreement on the European Commission’s massive coronavirus recovery package. Leaders of the 27 member states have been trying to agree on the financial architecture and the conditionality of the next long-term EU budget and an additional €750 billion recovery fund. Although the talks were set to conclude on Sunday, leaders only left the all-night long discussion on Monday morning; and they are set to resume talks at 4pm CET, Hungary Today writes.

On Friday, EU leaders met physically in Brussels to discuss the recovery plan to respond to the coronavirus crisis as well as construct a new long-term EU budget. The ongoing Special European Council meeting needs to review the Commission’s €1,074 billion Multiannual Financial Framework and the €750 billion Next Generation EU Fund devised to aid the rapid financial recovery of the member states after the coronavirus crisis.

The two most contentious issues at the centre of the talks are the financial architecture and the conditionality of the new EU funds. The recovery fund was originally divided into €500 billion to be handed out as grants and €250 billion in loans. However, Dutch Prime Minister Mark Rutte has been insisting on a €350 billion cap on grants. His position is supported by the leaders of the other so-called Frugal Four, now five, countries – Netherlands, Austria, Finland, Sweden and Denmark. As a result of his insistence, the amount of grants was reduced to €450 billion and an “emergency brake”, allowing greater scrutiny of spending, was added to the package. The new proposal is opposed by the Italians – one of countries worst hit by the coronavirus crisis.

The other contentious issue is about making the funds conditional on rule of law requirements. The proposal, backed by Germany and France, has been deemed unacceptable by Hungary and Poland. During the talks, Hungarian Prime Minister Viktor Orban has resolutely maintained the principle that “only Hungarians can decide on Hungarians’ money”, meaning that accessing EU funds should not be conditional upon criteria set by Brussels. He declared that he would veto the recovery package if such conditionality was added to the proposal. Additionally, he asked for guarantees from the EU to end the Article 7 procedure launched earlier against the country over the state of the rule of law as quickly as possible. As of Monday morning, no agreement has been reached.

When asked about his reasons for maintaining his position, Orban told reporters: “What’s going on is a little bit strange because there is a 100 per cent agreement on the rule of law. If somebody is not ready to accept the rule of law, (they) should leave the European Union immediately. It should not be punished by money or something other than say ‘goodbye son, goodbye guys’ because this community is based on the rule of law. And we like that approach, it’s ok”.

Although the EU Summit was originally meant to agree on the recovery package and the budget by Saturday, talks have not yet been concluded. The last round of discussions continued until Monday morning, and EU leaders are set to continue negotiations at 4pm on Monday. According to Viktor Orban, the failure to reach an agreement has been mainly the fault of the Netherlands. Orban said the Netherlands was pushing for the introduction of a mechanism that would grant it significant influence over the distribution of EU funds, especially in the case of southern member states. Hungary in this regard supports Italy’s position that the member states in need of urgent assistance should be the first to receive money.

Several contentious issues remain to be discussed this week. These include the inclusion of the rule-of-law conditionality mechanism, the size of the recovery fund, and the proportion of non-refundable grants versus loans contained within the package.

As regards the proportion between the non-refundable grants and loans contained in the rescue package, Orban said there was a “humiliating” discrepancy between the amount of funding that would be allocated to Hungary and what member states of similar size, similar population size, and revenues would receive. Though Hungary considers it unfair that it stands to receive several billions of euros less than those countries, it is willing to accept such a solution in the interest of European unity, Orban said.

The Prime Minister said it was vital to approve the recovery package, adding that he was prepared to continue talks on the matter this week.