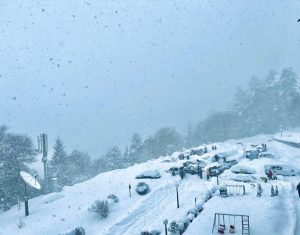 150 mountaineers from Macedonia, Serbia and Bulgaria are stuck in the Molika Hotel on Pelister and cannot go home, because they say the road on Pelister is not cleared due to heavy snow.

Yesterday, they climbed the Neolica peak, on the march dedicated to the February campaign, and the expedition is organized by the mountaineering sports association Lisec from Stip.

Although they say that this morning they were promised by the authorities that the road to Hotel Molika will be cleaned, by this afternoon the road was still covered in snow.