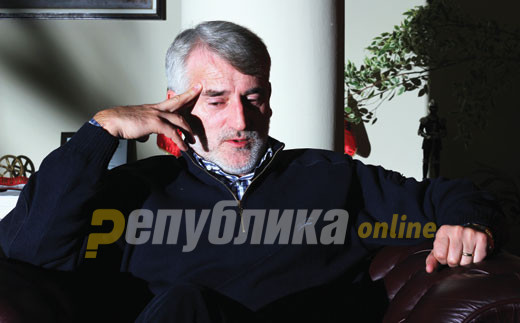 Menduh Thaci, leader of the now small DPA party that represents ethnic Albanians, said that a coalition between VMRO-DPMNE and SDSM, that excludes Albanian parties, would lead to war.
The idea of a grand coalition was raised by SDSM party leader Zoran Zaev, who urged VMRO leader Hristijan Mickoski to make an agreement that would leave out Ali Ahmeti’s DUI party and its request that the next Prime Minister is an ethnic Albanian. Zaev already plans to declare his SDSM party as the biggest party representing ethnic Albanians in Macedonia, and hopes that this would win him a seat in the Government even if his SDSM party loses the elections.

There can be no Government without Albanians. That can only lead to war, Thaci said.

Ziadin Sela, leader of the Alliance of Albanians, also addressed this option, saying that if there is a “Macedonian Government”, the Albanian parties will get together and elect their own “Albanian Government”.

Mickoski rejected Zaev’s offer, saying that SDSM candidates are already negotiating to switch to VMRO after the elections and that this would provide the conservative party with the necessary majority,  and the leisure to select the next coalition partner. Zaev has been changing his post-election coalition plans often, and after he made this offer, he has also declared that he is eager to form a coalition with DUI and/or the Alliance of Albanians.

Meanwhile, Ali Ahmeti continues to campaign on the notion that DUI will secure the office of Prime Minister for its nominee, former membrer of Parliament and minister Naser Ziberi.