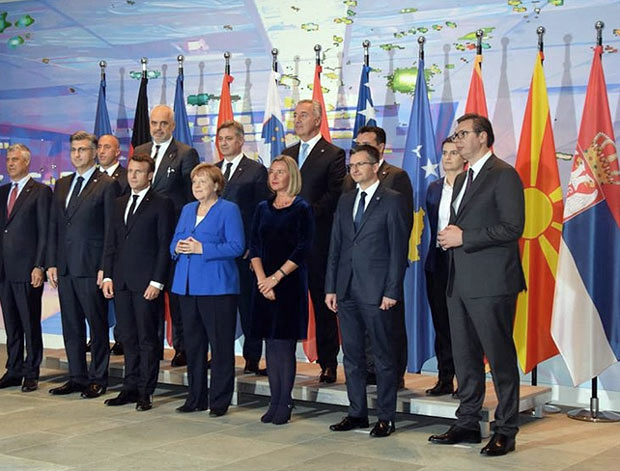 Shortly before the failure of the European Council, a notable supporter of Zoran Zaev raised the idea of replacing EU integration with a Balkan ghetto, but one that would be packaged in the most enticing way imaginable – Norway in the Balkans.

Gerald Knaus from the European Stability Initiative, is best known regionally as a proponent of open border policies, but was also a frequent guest and host of Zaev and his officials after their 2017 power grab. In a V4 report he was named as a person involved in putting together the Prespa treaty, and would reliably support Zaev and his policies in his public appearances.

V4 reports on ESI, a think tank promoting Soros’ positions in the Balkans

So it was noted with a significant surprise when he launched a Twitter thread two days ago, in which he promotes a radical departure with the process of EU integration, in light of French opposition. According to Knaus, a new objective should be to bind the Balkan countries into an ever stronger form of economic cooperation than now, and to label the entire thing a “South East European Economic Area” or a NORWAY IN THE BALKANS, as he wrote in all caps.

Since 2003 EU policy is to offer EU „perspective“ to the region, if it turns to democracy and rule of law, away from the deadly tribalism of 1990s which produced wars, destruction and millions of refugees. This worked very well. Wars took place all around EU since, but not in the Balkans. EU perspective can still inspire. This became visible in “North” Macedonia since 2016: peaceful change, democratic reforms, breakthroughs with neighbours. It was clear success of EU strategy. So how can France oppose opening talks now? This makes no sense for EU strategy.Yet, looking beyond “North” Macedonia, France has a strong point: the process is broken. Turkey opened talks in 2005: did this increase EU leverage? No. Serbia did in 2014. recent EU Commission reports found it was less advanced on reforms than Macedonia – after 5 years of talks This shows: yes, Macedonia deserves to start this process, but also that this process then produced no real change. Front-runner Serbia is NOT getting closer to ever joining EU. This breeds cynicism, not reforms, in the EU & in the Balkans, Knaus tweeted.

2. since 2003 🇪🇺 policy is to offer 🇪🇺 „perspective“ to region, if it turns to democracy & rule of law, away from the deadly tribalism of 1990s which produced wars, destruction & millions of refugees. This worked very well. Wars took place all around EU since, but not in Balkans.

His proposal out of this situation is very similar to what Zaev himself has been raising ever more frequently – the idea he calls “Mini Schengen” and which was discussed in Novi Sad recently with the leaders of Albania and Serbia.

Focus on substance. Focus on common market and its four freedoms and on reforms needed in the Balkans to join this. Offer ALL six Balkan countries in 2020 to open process to join South East European Economic Area – covering same issues as the EAA, where Norway is a member. This is not EU membership. It is a precondition for EU debate to be meaningful. It is crucial for economy, covers environment, procurement. It is GOOD FOR NORWAY and would be good for Balkans; merit based for each country, „more for more“ cohesion funding for real frontrunners. Importantly, it must do away with the meaningless ritual of „chapters“ & endless vetos. EU to set out roadmaps in each area of what is needed (look to EAA). Then tough assessments by European Commission and EU members state experts in all six countries. Let Bosnia and Serbia compete. Serbia and Turkey “opened many chapters” … it meant nothing. North Macedonia opened none so far, but is doing already better. This is absurd. A real process should set realistic close target. In whole region. Set out in 2020 in Zagreb. Restore credibility. Get French support. So this week EU should send 3 signals. To reward political courage of Macedonia talks will start. But no country will be left behind. All 6 countries will be offered process to join SEEA. This is not accession. It is better: a reachable interim stop … on the same road, Knaus wrote.