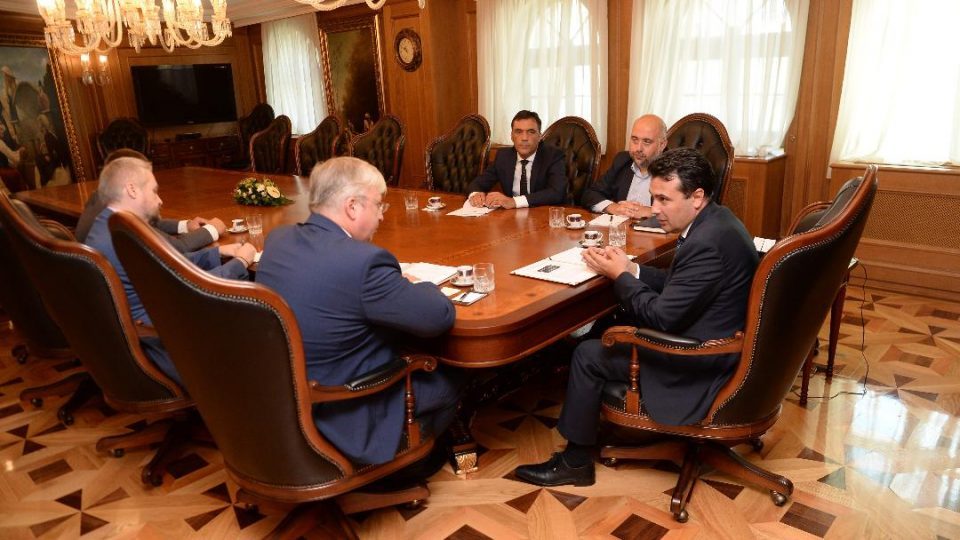 Zoran Zaev’s Government issued a press release following his meeting with Russian Ambassador to Macedonia Sergey Bazdnikin, and in it, it is again said that the prank calls which Zaev took and in which he details sensitive information, will not affect relations between the two countries.

Zaev also made the statement as he was opening a Lukoil gas station near Skopje, where he met with Bazdnikin, in which he walked back the fierce criticism he aimed at the Russian Federation the days before.

In the press statement, the Government underlines that “regarding the fraud with the phone conversations on the part of two Russian citizens, both sides expressed regret about the situation and confirmed it will not affect the bilateral relations between the Republic of Macedonia and the Russian Federation”.

This about-face comes after two days of permanent campaigning on the part of Zaev’s PR machine, to try cover up the embarrassing gaffes he made during the three conversations totaling one hour, in which Zaev disclosed sensitive regional information, accepted to give a bribe of 100.000 EUR to the Ecumenical Patriarch Bartholomew and agreed with the proposal that he should rig the September 2018 referendum. Some of Zaev’s sycophants in the social media realm were posting angry denunciations of Russia for orchestrating the prank calls.

In the conversations, Zaev also keeps going back to Russia and its alleged interference in the region over and over again. He most notably accused Russia of being behind the proposal to redraw borders between Serbia and Kosovo, to make both countries more ethnically homogeneous. The proposal was endorsed by Serbian President Aleksandar Vucic, who Zaev accuses of having close ties with Russia, but also by Kosovan President Hashim Thaci, which prompted Zaev’s apology call today. The proposal was also pushed by the European Commission officials Federica Mogherini and Johannes Hahn, as well as by a number of D.C. figures.

Zaev keeps warning the Russian pranksters Vovan and Lexus, who he believed were Ukrainian President Petro Porosenko and NATO Secretary General Jens Stoltenberg, that this border change would affect Abkhazia and lead to a possible Turkish take-over of Northern Cyprus. Left unsaid is what this would do for Macedonia and its own territorial integrity.

SDSM with its government in recent years has brought only corruption, crime and hybrid regime. Instead of SDSM lying to the citizens through scarce statements, let it answer with which parties it will secure a majority and who will be the prime minister, VMRO-DPMNE reacted Saturday to a statement from...
Macedonia 08.08.20 | 11:24