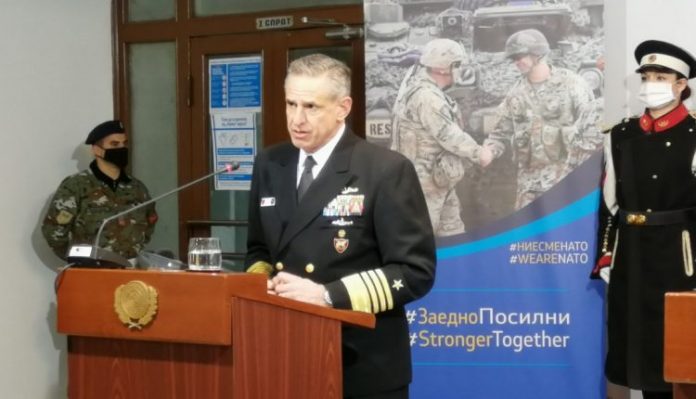 One year after joining NATO, Macedonia, instead of enjoying the economic benefits of the membership, got stuck in the vaccine procurement process.

Admiral Robert Burke, Commander of the NATO Allied Joint Forces Command Naples says NATO is looking at different options to facilitate the vaccine procurement process, but so far there is no concrete solution.

The question of NATO’s ability to contribute to providing vaccines is something that is very much on the leaderships’ mind. Countries are in different places in respect to their ability to get vaccines and then be able to administer them. We’re talking about this frequently at political and military levels. There’s a number of mechanisms in place besides national efforts, Burke told reporters on Friday during a joint-press briefing with Defence Minister Radmila Sekerinska when asked whether there’s a way for NATO to join the process of procuring COVID-19 vaccines in Macedonia.

The Admiral who is paying a visit to Macedonia on the occasion of the one-year anniversary of its NATO membership gave full support to the process of reforms in the military and the social sector. He also met with Prime Minister Zaev where he received assurances that the Government continues to invest in the Army with budget support that is growing even during the pandemic.