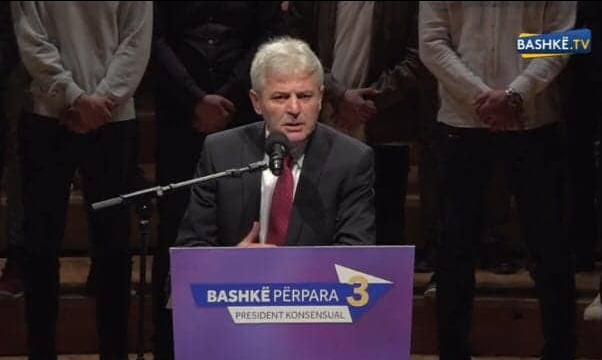 DUI officials at a campaign rally Thursday in Skopje called on ethnic Albanians in Sunday’s run-off to vote for the pro-Western candidate, backed with a consensus by the ruling SDSM-DUI coalition, because it would allow an Albanian to be the president of the state in five or ten years from now.

The Parliament Speaker was elected through a consensual concept, through understanding and dialogue. Thus, in the future, we think the president of the country, through dialogue and reconciliation, through the agreements to be realized as one goal, as one aspiration, but also a demonstration for all citizens in this country that the master in this country are the Albanians too and that the president of this country can be an Albanian. But this comes through a process called consensus. And we serve a philosophy, a concept that will become a reality after five, ten years, said Ahmeti in his address.

Explaining their concept, among other things, Ahmeti adds, not accidentally they insisted in the Ohrid Framework Agreement, that consensual democracy be one of the points of special importance, in order to prevent the majority from making decisions to the detriment of those who do not have a majority in Parliament or in another institution.

Alliance for Albanians and Alternativa: Ahmeti’s honorary degree is politicization of Tetovo University