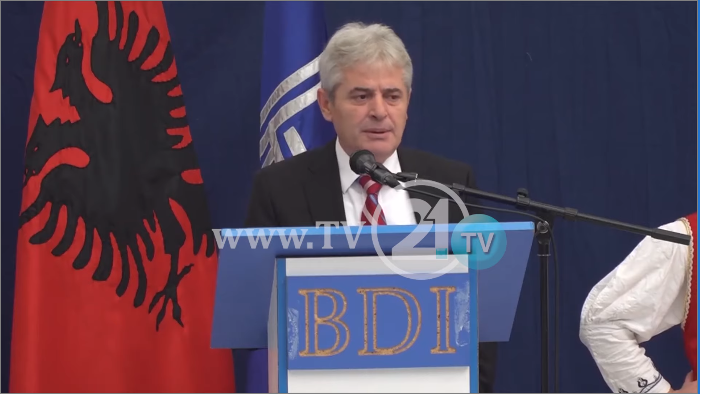 Speaking to the Saraj branch of his DUI party, a visibly upset Ali Ahmeti denounced Sekerim Ahmeti – the Chicago based leaker who is publishing wiretaps that raise allegations of corruption in the perennial junior coalition partner. The latest wiretap published by Sekerim Ahmeti, who goes by the social media name of El Cheka, has Ahmeti and his brother discussing an infrastructure business deal and Ali Ahmeti is heard saying “let’s make some money”.

I’m sorry that wiretaps are published about DUI. I don’t listen to those conversations. But I ask him, why doesn’t he publish private conversations of SDSM or VMRO-DPMNE members? Why only focus on DUI? Where are the other conversations? Why publish only our conversations? I don’t think that the people are sheep to buy this! Why did SDSM and VMRO-DPMNE do? They devalued the entire process. The events yesterday too. We said, we don’t want selective justice, Ahmeti said, apparently referring to the arrest of Bojan Jovanovski – Boki 13 and the subsequent resignation of Specia Prosecutor Katica Janeva.

Janeva is the guardian of the wiretaps which the SDSM party used since 2015 to cause a major political crisis. SDSM then published wiretaps of VMRO officials, and Janeva focused exclusively on pressing charges against them, while El Cheka is now revealing tapes about DUI. As kingmakers in Macedonian politics, given their role in often providing the necessary margin in Parliament to the two larger ethnic Macedonian parties, and given their close ties to the diplomatic corps in Skopje, DUI has been able to avoid any serious scrutiny despite of dozens of reports of corruption scandals.

Ahmeti re-elected leader of the DUI party, vows that no decisions will be made in Macedonia without his approval