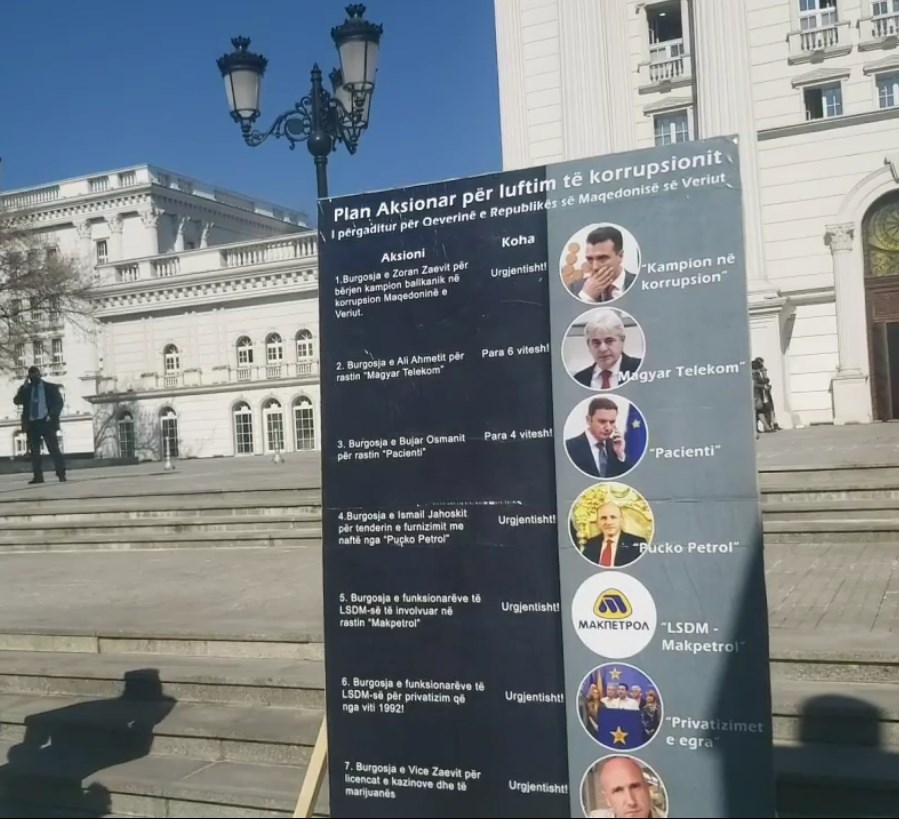 Today, in front of the Government building, the Alliance for Albanians and Alternativa placed a sign with, as they said, the most corrupt people in Macedonia. Omer Ajdini from the Alliance said that in order for the country to get rid of corruption, the two main political figures in the country, Prime Minister Zoran Zaev and his Albanian partner, DUI leader Ali Ahmeti, should be imprisoned.

Today action has to do with yesterday’s statement of Prime Minister Zoran Zaev who, fortunately or unfortunately, presented an action plan to fight corruption in his government. We believe that this action plan is very necessary precisely because this government is immersed in corruption. However, according to the analysis we made for this action plan, we believe that the first point should be the imprisonment of Prime Minister Zoran Zaev, who managed to make Macedonia the most corrupt country in the Balkans. The second point concerns the imprisonment of Ali Ahmeti, who is suspected of corrupt involvement in the Magyar Telekom case. Mr. Prime Minister, this Government led by you and Ali Ahmeti, awarded a public contract to the “Pucko Petrol” company owned by DUI MP for the procurement of oil derivats immediately after the July 15 elections, because Ismail Jahoski poured millions of euros to buy votes for DUI. Mr. Prime Minister, the government led by you and Ali Ahmeti will give millions of euros of people’s money to the oligarchs by buying shares from “Makpetrol”. Mr. Prime Minister, your Government and your people have created corruption scandals in the “Raket” case and very few of them have been brought to justice. Mr. Prime Minister, your Government and your people are committing massive corruption by giving permission to open casinos in the country, said the Alliance for Albanians.

Alliance on the “Mafia” affair: In Macedonia it’s easier for a criminal to obtain citizenship than a person born in this country