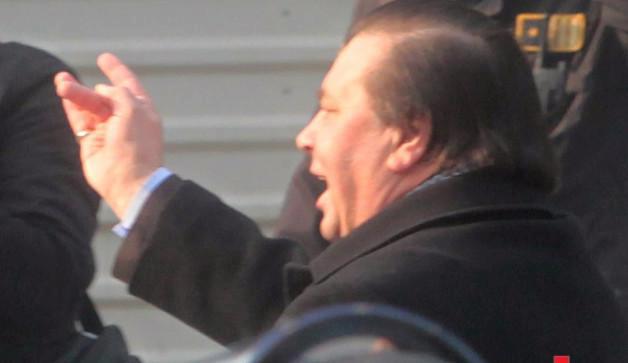 Amdi Bajram, leader of one of the main Roma parties in Macedonia, who is running for President at the elections in April, said that he expects even his political opponents, who he famously gave the finger to, to vote for him.

My goal is to unite the people for a better future. You see what is happening in the Republic of Macedonia, what it has come to, and we need to unify, said Bajram, and when asked about his gesture he added “it was a difficult situation, but those people will vote for me”.

Bajram insists that he is running a serious campaign, despite his often comical public persona. The incident in question happened in December 2012, when the then opposition SDSM party caused an incident in the Parliament and had supporters prepared to storm the building. Bajram walked behind the police lines protecting the Parliament and “greeted” the SDSM supporters.

During an earlier SDSM attempt to take over power, in 2000 when the party was trying to topple the Ljubco Georgievski Government through parliamentary re-alignments, Bajram was also initially offering support for the SDSM attempt, but later turned on them in what he described as “scoring a goal with the heel”. For this the next SDSM Government prosecuted him for theft and sentenced him to seven years in prison, but he received a commutation from SDSM leader and President Branko Crvenkovski and served only months.

In 2017 Bajram switched party lines again and joined SDSM after long supporting the VMRO-DPMNE led coalition, with a glib comment that he “needs to be with those who are in power”. This despite the fact that SDSM supporters badly beat up his son Elvis during the 2017 municipal elections.

Bajram is the second Roma politician to run for President. Samka Ibraimovski, who was member of the Zaev Government for a brief while in 2017, and is now member of Parliament, also announced a run for the presidency. He was recently best known by using his Facebook page to recruit Roma construction workers for jobs in Germany, which raised doubts over how committed in using his position as part of the ruling coalition to provide jobs in Macedonia.