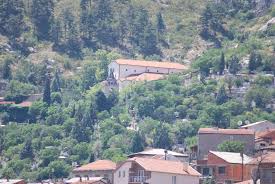 The city of Veles marks the anniversary of the 1945 massacre of 53 citizens, killed by the Yugoslav Communist regime.
The massacre was perpetrated as the Communists grabbed power in then Yugoslavia, and started going after people they labeled as political and “class” enemies. The killings were perpetrated on the night between January 14 and 15, by a squad commanded by General Jevto Sasic, commander of the OZNA secret police. The killings come one week after a revolt by the artillery brigade in Skopje, where officers refused an order to join the mop-up operations in Srem and Hungary and insisted to march on Solun (Thessaloniki) instead and help the Macedonian partisan units involved in the Greek civil war.

The killings in Veles were just one of the series of such massacres, perpetrated in cities across Macedonia. The victims included pre-war city leaders, well educated and well – off citizens who would not join the Communist movement, but also plain peasants. Some were accused of cooperating with the Bulgarian army during the occupation. The killings were perpetrated in a rugged area north of Veles – some of the men were killed with firearms but others savagely, with hammers.

Much of what is known about the massacre is due to journalist Boris Pop Gjorcev, whose father, Bogdan was killed in the massacre. Bogdan Pop Gjorcev was a Macedonian patriotic revolutionary and a Vienna educated physician, arrested one day after the Communist forces took the city in October 1944, with the German withdrawal north.

Journalist Predrag Dimitrievski writes that the massacre was to a degree caused by an accident. General Sasic was on his way to deal with the revolt in the military units in Skopje and in Stip, but had an accident along the way and landed in a river with his car. Angry, upon arrival in Veles, he gave an order that all political prisoners are killed at once. Only two men escaped along the way – both were recaptured but only given a year in prison after the General’s anger has subsided.

Under the Yugoslav regime reports of such crimes were covered up. The bodies were exhumed and reburied in Veles only after then President Kiro Gligorov urged a move toward reconciliation in 1995, on the 50th anniversary of the end of the war. The remains were buried in the St. Spas church in Veles (pictured), but shortly after the memorial in their honor was vandalized.

The crimes of the Yugoslav regime are coming back into focus with the growing dispute between Macedonia and Bulgaria. Bulgaria considers the political victims in Yugoslavia as targeted because of their Bulgarian national identity. In some instances this was the case, while in most others, the targets were supportive of a Macedonian nation state, or greater Macedonian sovereignty within Yugoslavia, or were simply killed or imprisoned because of their property that was later taken over by Communist officers.

Citizens of Vatasa, the site of a horrific 1943 massacre, angry at Zaev’s surrender to Bulgaria

Who ‘skipped the line’ to get COVID-19 vaccines and how much did people pay for it?