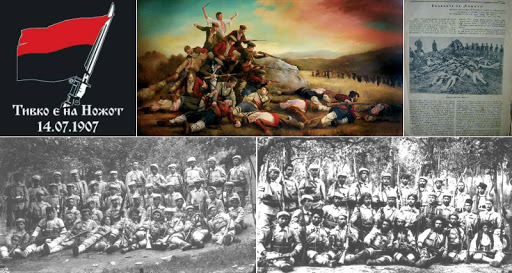 Macedonia marks the 113th anniversary of the Battle of the Knife, the epic confrontation between the VMRO komiti units from Prilep and Kostur and a large Ottoman regular army.

Of the near 200 komiti fighters, 67 died in a heroic last stand against several thousand Turkish soldiers. The VMRO commanders, vojvodi Tane Nikolov, Ivan Naumov and Petar Acev were engaged in the rugged terrain near Prilep, when the Ottomans surrounded the area. Instead of retreating, the day before the fight the vojvodi choose to face the attackers at the Nozot peak (the knife). Surrounded on several sides, the VMRO rebels fiercely resisted the assault, forcing the Turkish commander Enver Beg to call for reinforcements. Fully surrounded, the last 18 soldiers holding the Knife died or killed themselves using their last remaining bombs, while the bulk of the units retreated.

The battle is known for the rare photograph of the last stand, with the killed komiti fighters, taken by the attacking Turkish forces. “It is silent on the knife” remained as a rallying cry for Macedonian patriots for years to come.