The Macedonian public television (MRTV) is considering withdrawing Andrea Koevska from the Eurovision contest, after the singer threw the Macedonian flag to the ground. Koevska apologized after the incident, saying she wanted to give the flag to someone from her team, but nobody was close enough.

I can’t believe what is happening in the social media. These past days, wherever I went, I carried the Macedonian flag with me. At the moment I was asked for pictures without the flag, and my delegation was far from me. In the moment, I decided to throw it away. It was not out of hatred, I’m proud of where I come from, I’m here to represent Macedonia and I hope we can continue with this experience in a positive fashion. It was not my intention to insult anyone and I apologize, Andrea said.

MRTV, which is in charge of organizing the event, condemned Koevska’s gesture, calling it an “insult to the national symbol which is punishable by law”. The television said they are considering withdrawing her, but will also try not to cause even more harm. 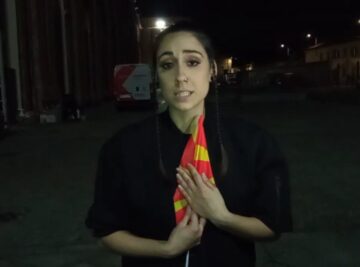 It’s the latest incident that has marred Macedonia’s Eurovision contests in a period of serious blows to the nations identity that started with the 2015 Colored Revolution. In 2019, Tamara Todevska was condemned for her all-too-frequent use of the imposed name “North Macedonia” and especially after she mangled the national anthem in the subsequent appearance at the 4th of July celebration organized by the US Embassy. Tamara left out the verse of the anthem where national liberation struggle heroes such as Goce Delcev and Dame Gruev are mentioned, as Bulgaria was ramping up its push to claim the heroes as their own. Tamara apologized by tattooing the verse on her body.

And in 2021, Macedonia was represented by Vasil Garvanliev, a dual citizenship holder who has a Bulgarian passport. Garvanliev had the Bulgarian flag inserted in the video for his song, which also caused loud protests considering how bad the relations with Bulgaria are.