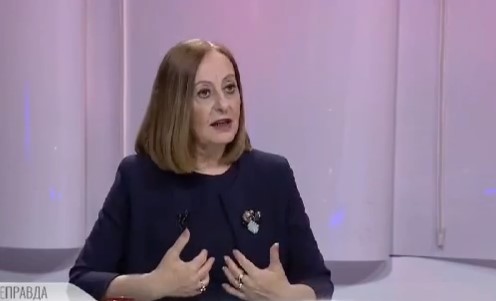 The latest hearing in the major Racket scandal was in the news mostly for the profanity of former Special Prosecutor Katica Janeva, who was removed from court after she insulted her former deputy turned witness for the prosecution Lile Stefanova. But another top judiciary official close to the ruling SDSM party may also end up badly affected by the hearing.

Stefanova told the court that judge Dobrila Kacarska, who is seen as one of the strongest supporters of the Zaev regime in the judiciary, was calling the Special Prosecutor’s Office and was asking about the case against businessman Jordan Orce Kamcev. In previous media opportunities Kacarska confirmed that she is very close to the Kamcev family, and that her family members have worked and work for Kamcev, but insisted that she never used her power to help the businessman.

She didn’t call me, but she called a different colleague. She stayed in the court all night long when Orce Kamcev was ordered into detention. The next day, she was there since the early morning and stayed until the next morning, Stefanova said about judge Kacarska.

The case against Kamcev was assinged to a different judge, Vesna Dimiskova, whose brother Vasil Dimiskov allegedly also tried to extort millions from Kamcev. But Kacarska is a very powerful member of the same Skopje court, and was given many other high profile cases that were staged to help Zaev’s rise to power and the imposed name change, most notably the April 27 trial.

We’ve been friends for generations, my uncle and my father were friends with the now late Ilija Kamcev, my mother worked for Ilija Kamev for 30 years as did the wife of my cousin. My daughter works in Kamcev’s Sistina clinic for 10 years now. But under full criminal and moral responsibility I tell the Macedonian public that I’ve never intervened with any judge on his behalf, Kacarska said.